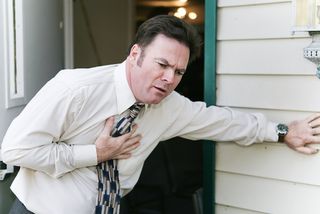 Sex does not increase heart attack survivors' risk of having another attack, except in rare cases, a new study finds.

The finding may provide comfort for countless heart attack survivors. Many are unsure whether the vigorous activity of sex can trigger another heart attack, and there is limited and some contradictory data on the issue, the researchers said.

But the new study shows that the amount of activity generated by sex is roughly equal to that of climbing two staircases or taking a brisk walk, and most people with heart disease are safe to resume sexual activity following a heart attack, they said. [6 (Other) Great Things Sex Can Do For You]

"Based on our data, it seems very unlikely that sexual activity is a relevant trigger of heart attack," study lead author Dr. Dietrich Rothenbacher, a professor and chairman at the Institute of Epidemiology and Medical Biometry at Ulm University in Germany, said in a statement.

In the study, the researchers followed 536 people between ages 30 and 70 at the start of the study, and who had previously experienced one heart attack. The participants put together a log that listed the sexual activities they recalled having during the 12 months leading up to their heart attack.

According to the self-report logs, 14.9 percent of participants did not engage in sexual activity in the year before their heart attack; 4.7 percent had sex less than once a month, 25.4 had sex less than once a week and 55 percent reported sexual activities one or more times a week. They also found that people who were more sexually active were often younger, male, had less severe heart disease, were less likely to have diabetes and were more physically active.

But when the researchers also looked at the timing of the last sexual activity before the heart attack, they found that just 0.7 percent of the patients (three people) reported sexual activity within two hours before having a heart attack. This finding "is in line with observations that sexual activity might eventually trigger a [heart attack] only in a very small proportion of patients," they wrote in the study.

In contrast, about 78 percent of people reported their last sexual activity happened more than 24 hours before the heart attack, the researchers found.

Moreover, the researchers also followed the participants over the next decade, and found that although the participants reported a total of 100 cardiovascular problems, sexual activity was not a significant risk factor for these cases.

The researchers controlled for a number of factors, including age, education, rehabilitation program, smoking status, history of diabetes, heart function and cholesterol.

Other studies show that people want more information about when it's safe to have sex after a heart attack.

"Less than half of men and less than a third of women are getting information about sexual activity after a heart attack from their doctors. It is important to reassure patients that they need not be worried and should resume their usual sexual activity."

However, the researchers noted that some cardiovascular medications have side effects that result in erectile dysfunction and the risk of a drop in blood pressure. These effects should be clearly communicated to patients, they said.