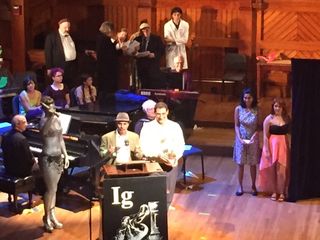 The 25th annual Ig Nobel Prize Ceremony tonight (Sept. 17) honored silly, yet thought-provoking, science. From painful bee stings on the penis and the health benefits of kissing, to the math of a sultan's promiscuous ways, this year's winners did anything but bore. Here's a look at the guffaw-invoking awardees.

Got tail? The Ig Nobel in Biology went to scientists who experimented with a chicken's hind end. By raising the young birds with a little extra junk in their trunk in the way of an artificial tail, the researchers were able to move the animals' center of mass toward the posterior. The results supported a hypothesis about the locomotion of theropods (mostly meat-eating dinosaurs that stood on two legs).

Egg-y solution: Chemists who did the seeming impossible — they unboiled a hard-boiled egg — snagged an Ig Nobel as well. In their magical experiment, which didn't break any laws of science, the team hard-boiled an egg white so that its proteins folded and refolded into a messy, disordered form. Then they used mechanical energy from a vortex fluid device) to get those proteins to refold into their original, untangled, shape. Besides scrambling one's mind with its complexity, the study could have applications in the pharmaceutical industry. Proteins often misfold and so are unusable in whatever drug they are part of, but if scientists could refold them again (using this "unboiling an egg" method), they could save time and money for drug development. That egg-cellent labwork is detailed in the journal ChemBioChem.

What did you say? The Literature Ig Nobel was awarded for … Huh? Yes, a trio of language and cognitive academics found evidence that that the expression "Huh?" (or its equivalent) can be found in every human language, or at least the 10 they examined. In all of the languages, this so-called repair initiator is used when someone hasn't heard clearly what another has said.

They also found that unlike grunts and emotional cries, "Huh?" is an actual word. "Huh? meets the criteria of a word in the sense of being a conventional lexical sign which must be learnt," the researchers wrote online Nov. 8, 2013, in the journal PLOS ONE. "Thus, in contrast to what has been presumed for interjections in general and for huh? in particular, we find that this item is linguistic in nature rather than being a mere grunt or non-lexical sound."

That hurts! Driving over speed bumps can make you giggle or they can make you cry in agony. That yelp of pain, it turns out, could be used as criteria to help doctors diagnose acute appendicitis. Doctors from Stoke Mandeville Hospital in the United Kingdom studied 67 patients who were driven to the hospital to come to that conclusion. So, if a doctor asks you if it was painful to travel over speed bumps, they likely aren't making friendly conversation but rather trying to make a diagnosis. The doctors won the Ig Nobel of Diagnostic Medicine for this somewhat hilarious, and possibly incredibly useful and life-saving, finding. (A quick diagnosis of acute appendicitis, meaning the appendix is inflamed, could keep the vestigial organ from bursting — something that can lead to death.)

Jumping off cliffs: Turns out, what doesn't kill a CEO will not only make him or her stronger, it may make them more comfortable with taking risks. The researchers who figured out this odd link were honored with the Ig Nobel of Management.

Specifically, the researchers found that "experiencing natural disasters without extremely negative consequences appears to desensitize CEOs to the negative consequences of risk," they wrote in their study published in April 2014. The risk-taking link didn't always hold true, however. "If a CEO was exposed to 'extreme' levels of fatal disasters and experienced the downside potential of risky situations, he or she appears to be more cautious in their approach to risk when at the helm of a firm," they wrote.

Making babies: Math and sex don't tend to go hand-in-hand, that is, unless you're trying to figure out if Sultan Moulay Ismaïl of Morocco, "The Bloodthirsty," could have sired hundreds to more than 1,000 kiddos. This schwing-worthy science, which relied on computer simulations, revealed that if the promiscuous ruler, whose reign lasted from 1672 to 1727, had sex about once a day for 32 years he could have fathered that many offspring. The algorithm that the researchers came up with was based on three models of conception and different social and biological constraints, they noted in their study, published Feb. 14, 2014, in the journal PLOS ONE. The sexy finding garnered these scientists the Ig Nobel of Mathematics. [Read more about the Sultan of Schwing]

Pee time! If you've ever wondered how long your dog, or even a cow, would need to urinate — or if you've never squandered away time focused on this super-serious question — there's now an answer grounded in science. For mammals that are bigger than a rat, they typically need about 21 seconds (plus or minus 13 seconds) to empty their tanks. That means an elephant, which can hold a whopping 5 gallons (18 liters) of urine in is bladder would take the same amount of time to relieve itself as a cat, whose bladder is much smaller. The research, detailed in June 2014 in the journal Proceedings of the National Academy of Sciences, was honored with the Physics Prize.

Money for nothing: The Economics Prize was awarded to the Bangkok metropolitan police in Thailand "for offering to pay policemen extra cash if the policemen refuse to take bribes," according to a statement from the Ig Nobel organizers.

No pain, no gain? No pain is too great in the name of science — sting science, that is. Michael Smith, from the department of neurobiology and behavior at Cornell University, endured honeybee stings over 25 locations on his body, including his buttocks (which required a mirror and erect posture), penis shaft and scrotum. Scientific method did not go by the wayside, as Smith adhered to meticulous methods: "The bee was held against the sting location until the sting was first felt, and kept at the location for 5 s [seconds] to ensure that the stinger would penetrate the skin. The bee was pulled away after 5 s, leaving the stinger in the skin. The stinger was left in the skin for 1 min, and then removed with forceps," Smith wrotes in his study, published April 3, 2014, in the journal PeerJ.

The least painful spots for bee stings: the skull, middle toe tip and upper arm, all of which he rated as a 2.3 for pain on a scale of 1 to 10, with 10 being the most painful. And the most painful locations — the nostril, upper lip, and penis shaft — received pain ratings of 9.0, 8.7, and 7.3, respectively. Lesson? Don't get stung on the face … or penis.

Smooch science: Scientists involved in research on the health effects of kissing won the Ig Nobel of Medicine. Some of that research revealed swapping saliva can temporarily reduce the severity of allergic skin reactions. So let's say you're allergic to pollen or mites and contact with these allergens causes you to break out in hives, try making out with someone before exposure. The result: Besides making you swoon, the kissing session could mean your allergic reaction isn't so severe.