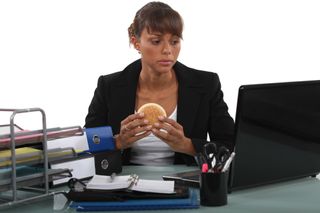 Sitting for long periods has been linked to obesity, diabetes and heart disease — and now there's new evidence that it may also increase the risk of liver disease, according to a new study from South Korea.

In the study, researchers found that people who sat for 10 or more hours daily had a 9 percent greater risk of developing a condition called nonalcoholic fatty liver disease (NAFLD) than those who spent less than five hours a day sitting.

Physical activity also played a role in people's risk of NAFLD: Those who were physically active were 20 percent less likely to develop the disease compared with those who were inactive, according to the study published today (Sept. 15) in the Journal of Hepatology. [How Many Calories Am I Burning? (Infographic)]

"The amount of time spent doing sedentary activity such as sitting at a computer or watching TV has increased dramatically in recent years," Dr. Seungho Ryu, professor of occupational and environmental medicine at Kangbuk Samsung Hospital in South Korea and lead author of the study, told Live Science. Now, "more than half of the average person's waking day involves sedentary activities," he said.

In the study, the researchers looked at more than 139,000 Korean men and women who reported their levels of physical activity and sitting time. NAFLD was confirmed using ultrasounds.

The average age of the participants was 39.9 years, according to the study. Because the people in the study were generally healthy -- young and middle-age men and women -- it's unlikely that other health problems can explain the link between sitting time and physical activity with NALFD, Ryu said.

The study suggests that regular physical activity, even at a high intensity, does not fully protect against the risks associated with prolonged sitting, he said. If the results of the study are confirmed, it will be important to encourage people to both increase their physical activity and reduce their sitting time to reduce the risk of developing NAFLD, he said.

Even doing light activity instead of sitting may help reduce the risk of NAFLD, Ryu added.

"Our body is designed to move, and it is not surprising that sedentary behavior, characterized by low muscle activity, has a direct impact on physiology," Michael Trenell, a professor of metabolism and lifestyle medicine at Newcastle University in England, wrote in an editorial that accompanied the study in the journal.

Sedentary behavior can increase the risk of insulin resistance and can lower cardiovascular function, he wrote. In people with insulin resistance, body cells lose their ability to respond to insulin by taking in sugar from the blood, leading to high blood sugar levels, and, sometimes, Type 2 diabetes.

"What remains less certain is the effect of sedentary behavior on the liver," he said.

Currently, there is a lack of drugs approved for treating people with NALFD, so lifestyle changes are the primary means of treating the disease, Trenell wrote. In general, 150 minutes of moderate exercise per week or 10,000 steps per day are considered good rules of thumb for physical activity, he wrote.

"However, the current literature cannot inform us how much sitting is too much," Trenell wrote. "We just know that it is better to sit less than to sit more."