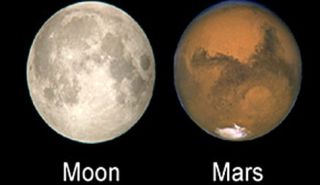 First, let's get one thing out of the way: Mars is not going to look as big as the moon in the night sky tonight. Or tomorrow night. Or any other night, barring some sort of unforeseen planetary catastrophe.

Any emails or Facebook messages to the contrary are, alas, nothing but a hoax. Rumors that Mars would appear as large as the moon first emerged in 2003, when the Red Planet was actually passing closer than usual to Earth. Since then, the hoax has circulated every year and is going around yet again, despite multiple attempts by NASA to debunk this myth.

Internet hoaxes are a dime a dozen, but there seems to be something about Mars that keeps this particular hoax alive. Perhaps it's a fascination with a planet that's so close to Earth — or perhaps the real-life discoveries from Mars are so amazing that the hoax seems believable, suggested Joshua Bandfield, a senior research scientist at the Space Science Institute and the University of Washington. [Mars Hoaxes! 6 Stubborn Red Planet Conspiracy Theories]

"When you put it in the perspective of, Mars may have had life at some point, or Mars is this complete other world that we've sent spacecraft to, maybe the idea that Mars will be as big as the moon doesn't sound so crazy," Bandfield told Live Science.

Birth of a hoax

On Aug. 27, 2003, Mars and Earth passed closer to each other than they ever had in recorded history — a distance of less than 35 million miles (56 million kilometers). Typically, Mars and Earth are about 140 million miles (225 million km) apart. An email claiming that Mars would be the second-brightest object in the sky that night quickly went viral. The email also said, "At a modest 75-power magnification, Mars will look as large as the full moon to the naked eye."

That weird phrasing (how is it "to the naked eye" if you need magnification?), combined with a poorly placed line break, made many readers believe Mars would be looming huge. In fact, the Red Planet wasn't even the second-brightest night-sky object that night. That designation went, as it usually does, to Venus.

Since then, variations on the email have spread each year. In 2005, Mars again passed fairly close to Earth, at a distance of 43 million miles (69 million km). The event revived the Mars hoax in a big way, prompting NASA to issue a thorough debunking.

Lately, Facebook has become the new host of the Mars hoax phenomenon. This year, an altered image showing two moon-size objects over some church or temple-type buildings is circulating along with the myth.

Many people who pass on the Mars hoax might realize it's impossible if they stopped to think about it, Bandfield said. But people are bombarded with information and stories online, and a gut response of "That's cool!" is all it takes to click "Share," he said.

Still, Mars seems especially beloved by the general public — it's hard to imagine a Neptune hoax circulating for so long, so widely. In many ways, Mars and Pluto seem to have taken center stage in the solar system. Fans gnashed their teeth when Pluto lost its status as a planet in 2006 — a scientific nomenclature decision that drew more attention than any other, except perhaps the ongoing debate over Brontosaurus versus Apatosaurus.

Both planets have been the subjects of large, flashy research missions, including the Mars rovers and the recent New Horizons flyby of Pluto. A certain nostalgia factor could be at play with Pluto, as well, Bandfield speculated.

"Mars is the easy one, I think," he said. "It's our neighbor in the solar system, and it's the most Earth-like planet." Evidence of past life on Mars would have major implications for how earthlings think of themselves and their place in the solar system. [Why We Love Mars]

On top of all that, Mars has been featured in movies and books for so long that it hardly feels 140 million miles away. Ray Bradbury's "The Martian Chronicles" and movies like the upcoming Ridley Scott film "The Martian" keep Mars in the public eye.

"For me, the deepest meaning of Mars is, it represents some kind of longing for something outside ourselves, something outside our own world," Robert Crossley, an English professor and author of "Imagining Mars: A Literary History" (Wesleyan, 2011) told Live Science in 2012.

If that's the case, perhaps the specter of Mars looming as big as the moon makes us feel a little less alone in the universe.