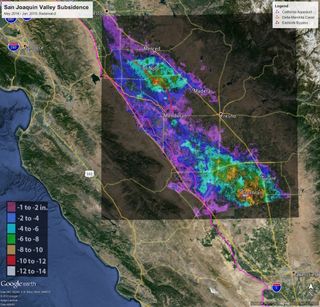 New NASA imagery reveals that parts of California are sinking at an astonishing rate, with some parts of the San Joaquin Valley sinking as much as 2 inches per month.
(Image: © Canadian Space Agency/NASA/JPL-Caltech)

Some areas of the Golden State are sinking more than 2 inches (5.1 centimeters) per month, the imagery reveals. Though the sinking, called subsidence, has long been a problem in California, the rate is accelerating because the state's extreme drought is fueling voracious groundwater pumping.

"Because of increased pumping, groundwater levels are reaching record lows — up to 100 feet (30 meters) lower than previous records," Mark Cowin, director of California's Department of Water Resources, said in a statement. "As extensive groundwater pumping continues, the land is sinking more rapidly, and this puts nearby infrastructure at greater risk of costly damage." [It's Raining Spiders! The Weirdest Effects of California's Drought]

What's more, this furious groundwater pumping could have long-term consequences. If the land shrinks too much, and for too long, it can permanently lose its ability to store groundwater, the researchers said.

The state's sinking isn't new: California has long suffered from subsidence, and some parts are now a few dozen feet lower than they were in 1925, according to the U.S. Geological Survey.

But the state's worst drought on record — 97 percent of the state is facing moderate to exceptional drought — has only accelerated the trend. To quantify this accelerated sinking, researchers at the Department of Water Resources and NASA's Jet Propulsion Laboratory in Pasadena, California, compared satellite imagery of California over time. Thanks to images taken from both satellites and airplanes using a remote-sensing technique called interferometric synthetic aperture radar (InSAR), which uses radar to measure elevation differences, researchers can now map changes in the surface height of the ground with incredible precision. For the current study, the team stitched together imagery from Japan's satellite-based Phased Array type L-band Synthetic Aperture Radar and Canada's Earth Observation satellite Radarsat-2, as well as NASA's airplane-based Uninhabited Aerial Vehicle Synthetic Aperture Radar.

Certain hotspots are shrinking at an astonishing rate — regions of the Tulare Basin, which includes Fresno, sank 13 inches (33 cm) in just eight months, they found. The Sacramento Valley is sinking about 0.5 inches (1.3 cm) per month. And the California Aqueduct — an intricate network of pipes, canals and tunnels that funnels water from high in the Sierra Nevada mountains in northern and central California to Southern California — has sunk 12.5 inches (32 cm), and most of that was just in the past four months, according to the new study.

The unquenchable thirst for groundwater in certain regions is largely a result of agriculture: Most of the state's agricultural production resides in the fast-sinking regions around some of the state's most endangered river systems — the San Joaquin and Sacramento rivers. As the heat and lack of rainfall have depleted surface-water supplies, farmers have turned to groundwater to keep their crops afloat.

Subsidence isn't just an aesthetic problem; bridges and highways can sink and crack in dangerous ways, and flood-control structures can be compromised. In the San Joaquin Valley, the sinking Earth has destroyed the outer shell around thousands of privately drilled wells.

"Groundwater acts as a savings account to provide supplies during drought, but the NASA report shows the consequences of excessive withdrawals as we head into the fifth year of historic drought," Corwin said. "We will work together with counties, local water districts, and affected communities to identify ways to slow the rate of subsidence and protect vital infrastructure such as canals, pumping stations, bridges and wells."