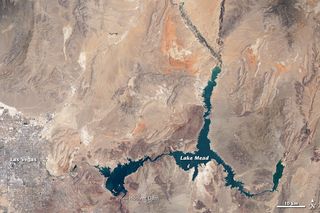 Years of unrelenting drought are straining a large reservoir of water between Nevada and Arizona, new satellite images reveal.

Images taken July 25 show that Lake Mead’s water level has dropped by about 120 feet (37 meters) from where the water reached 15 years ago, on July 6, 2000. The Landsat 8 satellite, jointly managed by NASA and the U.S. Geological Survey, captured both photos of the sprawling reservoir.

Lake Mead is no stranger to droughts. The man-made lake hit lower-than-average water levels in the mid-1950s and mid-1960s, and the current depletion is part of a decade-long trend, according to NASA. Lake Mead's current low level hasn't been recorded since the 1930s, when the lake was first being filled, agency officials said. [Dry and Dying: Images of Drought]

Lake Mead formed as a byproduct following construction of the Hoover Dam, which was built between 1931 and 1936. The Hoover Dam is a concrete structure that was developed to harness the Colorado River, author Joseph Stevens wrote in his book "Hoover Dam: An American Adventure" (University of Oklahoma Press, 1988).

The iconic white concrete wedge that straddles the border between Arizona and Nevada created a huge reservoir that was named Lake Mead after Elwood Mead, a commissioner of the Bureau of Reclamation, who died of a heart attack in January 1936, according to Stevens.

The reservoir can hold 9.3 trillion gallons (36 trillion liters) of water at maximum capacity. Most of the water trickles down from surrounding mountains as snowmelt, enters Lake Powell, travels through the Grand Canyon and eventually makes its way to Lake Mead, according to NASA.

Arizona, Nevada, California and northern Mexico all depend on Lake Mead's water, with the Las Vegas Valley relying on the reservoir for about 90 percent of its water supply, NASA officials said.

The Virgin River Basin, which is the circular feature that once attached to Overton Arm, looks parched in the new photo. The shorelines of Boulder Basin to the west and Gregg Basin to the east also look different compared to their water levels in the satellite view from July 2000, according to NASA.

Simultaneously, populations are settling farther into the desert, continuing a trend that was noticed in previous images from space that span a 25-year period, beginning in 1984, NASA officials said.