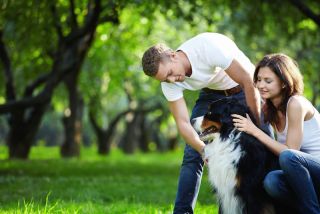 Dogs may play catch, obey commands and even share the occasional dessert with their owners, but can they understand simple interactions between people?

In a recent experiment, dogs tended to avoid people who had snubbed the animals' owners, the researchers found. This suggests that dogs can read human social situations, an ability known as "social eavesdropping." [Like Dog, Like Owner: What Breeds Say About Personality]

However, not everyone is on board with the study's conclusions.

"So far, it is not clear what dogs understand about human interactions," said Marie Nitzschner, a postdoctoral researcher at the Max Planck Institute for Evolutionary Anthropology in Germany, who was not involved in the study. "More research is needed."

As many dog owners know, the animals eagerly watch people all the time, said the study's senior author, Kazuo Fujita, a professor of psychology and comparative cognition at Kyoto University in Japan.

But it's not clear whether dogs watch people for the animals' own immediate benefit (such as for a signal that they're getting a treat) or simply to figure out what's happening.

If dogs, or any animals, are able to socially eavesdrop on people, it could help the animals assess people from afar.

"The ability to glean information from a social exchange without having to participate in it themselves would be very useful," said Shannon Kundey, an associate professor of psychology at Hood College in Maryland, who was not involved with the study. "They would be able to gain a lot of information while putting themselves at minimal risk."

Scientists have assessed social eavesdropping in a menagerie of animals, including chimpanzees, tufted capuchin monkeys, common marmosets, domestic dogs and cleaner fish, in which the animals watched human actors interact. But many of these studies involved food.

"[This] raises the possibility that [animal] participants simply preferred actors who were more likely to give them a better chance of getting food," instead of figuring out the human interaction, the researchers said in the study.

For instance, "Typically, one actor generously gives food to a human beggar, and the other refuses to do so," Fujita told Live Science in an email. "And the dogs tended to go to the generous actor. No wonder. Dogs may naturally do so with the expectation that 'this person is more likely to give me food.'"

To avoid the complication of food in the new experiment, the researchers created a social interaction using a junk object (a roll of vinyl tape in a container). In all, 54 dogs and their owners completed the test.

In the experiment, the dog watched its owner unsuccessfully try to open a container holding tape. The owner requested the help of an actor sitting nearby. In one condition, the actor helped the owner by supporting the container, allowing the owner to open it and retrieve the tape. In another condition, the actor refused to help, by turning away.

After these interaction sequences, the actor and a neutral bystander simultaneously offered treats to the dog. The researchers noted which person the dog preferred.

"[The] dogs avoided people who behaved negatively to the owner," Fujita said.

It's perplexing that the dogs didn't prefer the helpful actor over the bystander in the first condition, but perhaps helping is a "standard" that dogs have, meaning it's possibly status quo and nothing special, Fujita said.

"Dogs may have hated a violator of this standard," he said. "Similar negativity bias has been reported in human infants."

The new study supports the idea that dogs can socially eavesdrop on people, Fujita said.

The "dogs made a social evaluation in a situation irrelevant to their immediate benefit," he said.

However, the study has several limitations, experts said. The dog owners did not know the purpose of the experiment, but they may have conveyed cues to the dogs that they didn't like the actor who snubbed them, Kundey said.

It's also unclear whether the actor and the bystander changed positions, or whether one was always on the right-hand side of the owner, and the other on the left. For instance, a dog might choose a side, rather than a person.

"For example, I would doubt that the dogs would still choose the neutral person in the nonhelper condition, if neutral person and nonhelper would change their positions after the interactions and before the dogs chose (at least, this is what I found in one of my studies)," Nitzschner wrote in an email.

In fact, the vinyl-tape interaction is "quite complex, and I'm not sure if the dogs really understand what is going on there," Nitzschner added. If the dogs truly understood the interaction, more of them should have taken the treat from the helper in the helping situation, she said.

Dogs may be experts in reading people — including an owner's gestures, facial expressions and maybe even emotions — but it's unclear how much the animals understand about human interactions.

"The literature on this revealed mixed results," Nitzschner said. "That's why we need more research on this."

The study was published in the August issue of the journal Animal Behavior.