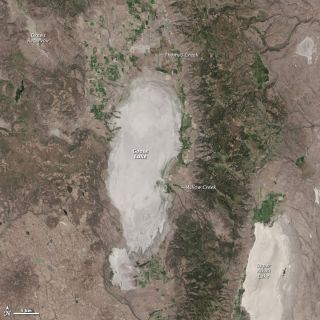 A lake straddling the California-Oregon border looks like an empty swimming pool in new photos taken from space.

The water levels of Goose Lake and its several neighboring lakes depend on the season's rain and snow amounts, and California has been in a drought. A camera onboard NASA's Landsat 8 satellite captured the lake's current dry spell on June 25, according to NASA's Earth Observatory.

The photo of the parched lake is a stark contrast to a photo taken by NASA when the lake was hydrated two years prior, on June 3, 2013.

Goose Lake State Park has a "dry lake" advisory on its website as of May 13: "The Lake is dry and not available for boating or fishing from the park."

When Goose Lake brims with water, it spans about 145 square miles (375 square kilometers), with a depth of about 24 feet (7 meters). There are eight fish species native to the Goose Lake basin, including the redband trout, suckerfish, tui chub, lamprey, Pit-Klamath brook lamprey, speckled dace, Pit roach, and Pit sculpin.

When the lake is dry, the fish head over to the tributary streams connected to Goose Lake. Redband trout used to be commercially fished, but its populations have not been consistent from year to year.

Most of Goose Lake's water flows in during the spring and early summer and comes from snowmelt that accumulates in its eastern streams. Goose Lake also receives water from groundwater basins.

Dryness in the 1920s shriveled the lake to the point where wagon tracks left by gold miners of the mid-1800s appeared on the exposed lakebed, according to the Earth Observatory.

Goose Lake is not the only thirsty lake on the West Coast. Oregon's Lost Lake, a disappearing shallow lake that turns into a meadow, drains when rainfall is low, and Lake Mead, which supplies water to Southern California, could vanish by 2021.