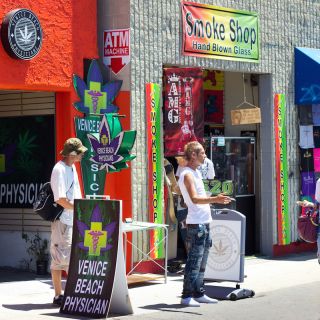 California neighborhoods that have more medical marijuana dispensaries may also have more hospitalizations related to marijuana abuse or addiction, a new study finds.

In the study, researchers calculated the number of dispensaries per square mile within California ZIP codes, and found that each additional pot shop was linked to a 6.8 percent increase in the number of pot-related hospitalizations.

The findings may help illuminate the effects of increased marijuana availability, as voters and state legislatures decide whether the drug should become medically or recreationally legal, the researchers wrote in their findings, which will be published in the Sept. 1 issue of the journal Drug and Alcohol Dependence.

"As marijuana is approved for medical or recreational use, we need to carefully consider where we allow dispensaries to be placed," lead researcher Christina Mair, an assistant professor at the University of Pittsburgh Graduate School of Public Health, said in a statement.

"Our study indicates that there are real problems associated with a higher density of marijuana dispensaries in neighborhoods," Mair said. Community discussions are needed to ensure that marijuana laws have the fewest negative consequences for vulnerable people, she said. [11 Odd Facts About Marijuana]

However, the study found a correlation, not a cause-and-effect relationship, between dispensaries and hospitalizations. It's possible that other factors played a role in the uptick in hospitalizations, Mair and other experts said.

"What we really can't know from the study is whether or not [the increase in hospitalizations] is because of dispensaries," said Sam Harper, an associate professor of epidemiology at McGill University in Quebec, who was not involved in the study.

Previous research has shown that, in areas where alcohol is readily available at liquor stores and bars, there are higher rates of local violence, arrests and alcohol-related hospitalizations, Mair said. She and her colleagues decided to put marijuana dispensaries to the same test, determining whether they were associated with more overnight hospital stays related to pot use.

Mair said she and her colleagues chose to study California because of its long history with medical marijuana — in 1996, the state became the first to legalize medical marijuana (although its recreational use has not been legalized). Since then, 22 states and the District of Columbia have passed similar laws, and four of those states have also legalized marijuana's recreational use.

The researchers collected data on discharges from California hospitals from 2001 to 2012 that had at least one overnight stay and involved either marijuana dependence or marijuana abuse.

Their analysis showed that marijuana-related hospitalizations nearly quadrupled during that time, increasing from about 17,500 in 2001 to about 68,500 in 2012. (Patient data is confidential, so it's possible that some people were hospitalized more than once, she noted.)

This data "tells us that people aren't acutely overdosing on marijuana and getting sent to the hospital," she told Live Science. Rather, marijuana is a contributing factor to hospitalizations.

Next, the researchers looked up the addresses of the 1,650 medical marijuana dispensaries in California in 2012. They found that 27 percent of ZIP codes had at least one dispensary, with the number ranging from zero to 40. They compared the density of dispensaries in each ZIP code to the ZIP codes listed in the pot-related hospital discharges. [The Drug Talk: 7 New Tips for Today's Parents]

Aside from the 6.8 percent increase in hospitalizations for every dispensary, the team also found that a greater density of retail stores, lower household income, fewer people who completed college and lower population density were linked with more pot-related hospitalizations.

The study is a good "first step" toward learning about the possible effect of medical marijuana dispensaries on pot-related hospitalizations, Harper said.

"It suggests a possible link between marijuana dispensaries and hospitalizations, but it's not definitive," he said.

The authors also acknowledged that more work is needed to study the relationship — preferably, research that looks at a change in neighborhood dispensaries over time, instead of just at one point in time.

“It's unclear if the marijuana dispensaries are simply locating in neighborhoods that tend to be more disadvantaged and already have underlying problems with marijuana abuse, or if the presence of the dispensaries is causing an increase in abuse and hospitalizations,” Mair said in the statement. "It could be a combination of both factors."