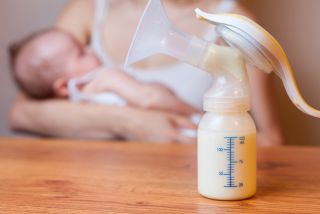 It's the first week of August, and that can mean only one thing: It's World Breastfeeding Week. Every year, from Aug. 1 to Aug. 7, the World Alliance for Breastfeeding Action (WABA) sponsors a campaign to educate the public about the benefits (and challenges) of breast-feeding.

WABA centers its global campaign around a different theme every year. This year, the theme is "breastfeeding and work," a topic that's on the minds of many breast-feeding mothers who must return to the workplace, or just their regular daily routine, soon after the baby is born. Balancing a newborn's need for milk with the demands of any job is tough, but one startup company thinks it can make things a bit easier for moms.

Just in time for World Breastfeeding Week, Kohana Inc. has launched a Kickstarter campaign to raise money for the development of new breast-milk-pumping technology. Kohana is a company that was birthed, so to speak, from the "Make the Breast Pump Not Suck" Hackathon, a weekend-long brainstorming session hosted by the Massachusetts Institute of Technology in September 2014.

The point of the hackathon was very straightforward: design a better breast pump (manual or electric devices that extract milk from the breast). Specifically, participants wanted to address two main concerns: They wanted to create a pump that doesn't make a woman feel like her breasts are being attacked by a vacuum cleaner, and a pump that is more discreet than the giant milking machines now on the market. [The Cleavage Countdown: 8 Facts About Breasts]

Kohana's Gala pump was a direct result of the MIT Hackathon and is radically different from most pumps on store shelves today. Rather than creating a vacuum suction between the breast and the plastic cone of the pump, the Gala pump uses compression to draw milk from the glands at the base of the breast. The electric pump mimics the technique of hand compression, which women have been using for centuries to extract milk from lactating breasts, without the use of heavy machinery.

The company's website says the pump feels like a "blood pressure cuff, but less painful." That's good news for moms who find conventional breast pumps to be uncomfortable. But that's not all the Gala has to offer — this pump could keep nursing moms out of bathroom stalls and storage closets (the places that many mothers escape to when it's time to pump at work).

Kohana's pump comes with a special bra that has extra room in each cup for "inflatable bladders." These little bags fill up with milk when you turn the pump on or start manually pumping (the device works both ways). The pump is battery-operated, so women don't have to plug it into a wall. In fact, setting up the device simply involves inserting the milk-collecting bags inside the bra and then turning the pump on. After that, mothers can button up their shirts and get back to work. In fact, women can even sit at their desks and do work while pumping.

The Kickstarter campaign that could bring this new, mom-friendly tech to stores is up and running until  Aug. 13. Funds from the crowdfunding site will be used to conduct a small trial in which women will use both conventional vacuum pumps and Kohana's compression pump to see which device extracts more milk by volume in a 15-minute period, the company told Live Science in an email.