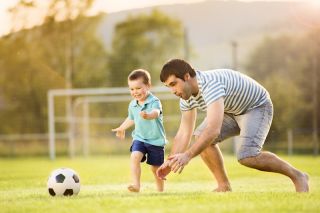 Men who become fathers at a young age may have an increased risk of dying during middle age — in their late 40s or early 50s, new research finds.

For men who became fathers slightly later, between ages 22 and 24, the risk of dying in middle age was 14 percent higher than that of men who fathered their first child at age 25 or 26. [Beyond Vegetables and Exercise: 5 Surprising Ways to Be Heart Healthy]

The findings suggest that young fathers have poorer health than men who become fathers at age 25 or older, but it's not clear why, the researchers said.

Future research may tease apart the link between young fatherhood and how a man's family environment, early life circumstances and genetics may affect his risk of midlife death, the researchers wrote in the study, published online today (Aug. 3) in the Journal of Epidemiology & Community Health.

It's possible that early fatherhood may interrupt career plans and push young dads into lower-paying jobs, which could impair their health, the researchers said.

"Parenting at a young age can be challenging, and it is important that family members and health professionals recognize that it is not only the young mothers, but also the young fathers that may need support," said the study lead author, Elina Einiö, a postdoctoral social researcher at the University of Helsinki.

Previous research had found a link between early fatherhood and an increased risk of early death, but the new study is the first to use brothers as a control group, Einiö said.

Other studies have compared young fathers to dads in the general public, but that made it difficult to control for genetic and environmental issues that may also affect men's risk of middle-aged death, Einiö said.

"It was unclear whether the association [in earlier studies] was credible," she said.

In the new study, Einiö and her colleagues used the men's brothers as a control group, as they were more likely to share genetic and environmental factors than other men in the population. However, the researchers also compared the fathers to each other, regardless of family ties.

During the study, about 1 in 20 of the fathers died. The main causes of death were heart attacks (21 percent) and diseases related to alcohol poisoning (16 percent).

It turned out that those who became fathers at the oldest ages had the lowest mortality risk. Men who fathered their firstborn between ages 30 and 44 were 25 percent less likely to die in middle age than those who became dads at age 25 or 26. [Sexy Swimmers: 7 Facts About Sperm]

The findings held true regardless of the men's year of birth, early life circumstances, educational levels, marital status, region of residence and number of children, the researchers said.

"The findings of our study suggest that the association between young fatherhood and midlife mortality is likely to be causal," and not simply a correlation, the researchers wrote in the study.

It's unclear whether the factors at work when these men became fathers will also affect today's young fathers, but different, new stressors may also impact their health, the researchers wrote.

"The findings of our study provide evidence of a need to support young fathers struggling with the demands of family life in order to promote good health behaviors and future health," they wrote in the study.