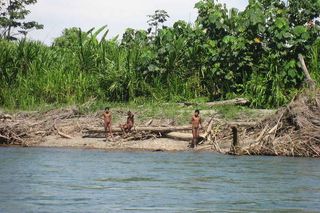 The Peruvian government plans to make its first contact with the Mashco Piro, an isolated tribe that live in the Amazon rainforest.

Reaching out to "uncontacted" tribes is controversial, particularly because isolated tribes lack immunity to common diseases, which can quickly turn deadly. But officials say they need to contact the Mashco Piro because the group has recently been emerging from the forest, and have had contact with villagers, tourists and missionaries.

In September 2014, for example, the advocacy group Survival International reported that Adventist missionaries had left food and clothes for the tribe near the border of Manu National Park. Gestures like this have spread diseases to uncontacted people in the past, causing epidemics.

As a result of these largely unplanned, uncontrolled contacts, some anthropologists argue for deliberate contact with isolated peoples. (Most uncontacted tribes do have limited interactions with their neighbors and are aware of the outside world, but choose to maintain an isolated and nomadic lifestyle in the forest.)

"Unless protection efforts against external threats and accidental encounters are drastically increased, the chances that these tribes will survive are slim," anthropologists Robert Walker of the University of Missouri and Kim Hill of Arizona State University wrote in an editorial in the journal Science in June.

"A well-designed contact can be quite safe, compared to the disastrous outcomes from accidental contacts," they wrote. "But safe contact requires a qualified team of cultural translators and health care professionals that is committed to staying on site for more than a year."

Organizations such as Survival International strongly oppose contact, arguing instead for strict protections of native land. Given activities such as illegal logging and drug trafficking, however, those protections can be hard to enforce.

The Mashco Piro have been making their own forms of contact, according to Reuters. Members of the tribe attacked a settlement of the Machiguenga tribe in May 2015, killing one man. Another clash in 2011 between locals and the tribe reportedly left one dead and a park ranger injured. Two groups of uncontacted Peruvians approached Brazilian authorities in July and August 2014, saying they had been attacked by non-Indians, possibly drug runners or illegal loggers.

Peruvian policy usually calls for leaving isolated tribes alone, but these incidents have led to an exception. The goal of the planned contact is to find out why the Mashco Piro have been emerging from the forest more frequently, in hopes of preventing more clashes.

"In 2014, there were 70 sightings of Mashco Piro on the beaches of the river," Patricia Balbuena, the deputy minister of multiculturalism in Peru, told the newspaper El Comercio. In 2015, she said, there have already been five raids on local communities by the group.