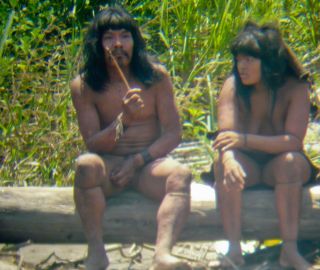 A Mascho-Piro man and woman. The group choses to live away from civilization, likely because of past brutalities when outsiders encroached on their land.
(Image: © © D. Cortijo/Survival/uncontactedtribes.org)

New images of an uncontacted Peruvian tribe reveal a small band of people, clad in little more than beads and bands of fabric, sitting by a river in the southeastern part of the country.

The photographs, released by advocacy group Survival International, are the closest-ever glimpse of uncontacted Indians ever caught on camera, according to the organization. They provide considerably more detail than earlier images taken from aircraft over settlements.

The people in the photograph belong to the Mashco-Piro tribe. This tribe likely descends from a group that was attacked and displaced in 1894, when rubber baron Carlos Fermin Fitzcarrald encroached on their ancestral lands. Surviving members of the tribe maintain voluntary separation from the outside world, though oil exploration may be encroaching on their solitude, according to Survival International. [See new photos of uncontacted tribe]

The dangers inherent in contacting tribes who'd rather be uncontacted came to the forefront this November, when a local Peruvian man of the Matsigenka tribe, Nicolas Shaco Flores, was found shot through the heart by a Mashco-Piro arrow. Flores had long been in touch with the tribe, albeit at a distance, wrote anthropologist and friend Glenn Shepard on his blog "Notes from the Ethnoground."

"Missionary groups, adventure tourists and intrepid natives have tried to approach the Mashco-Piro over the past twenty years, while illegal loggers may have attacked them. But none achieved the level of communication that Shaco had," Shepard wrote on Jan. 26. "By the time of his death in late 2011, Shaco maintained fairly regular verbal communication with the Mashco-Piro, albeit always at a distance. … He planted a garden across the river from his house, on the fringes of their territory, and allowed them to gather and eat crops there. It was in this garden that a Mashco-Piro bowman ambushed him."

The typical response to such incidents is to close off the area to outsiders, Survival International spokeswoman Chloe Corbin told LiveScience. Already, she said, Peruvian officials have closed off the riverbank where the newly photographed Mashco-Piro were seen, to prevent tourists from trying to visit. The Indian Affairs Department plans to set up a guard post to keep visitors and the tribe apart.

Even without violence, contacting an isolated native tribe can be deadly. Uncontacted people lack immunity to the diseases that most people fight off with ease. According to Survival International, 50 percent of the previously uncontacted Nahua tribe died of disease in the 1980s after oil exploration brought outsiders into their lands.

Earlier this year, a possible attack by drug traffickers may have driven an uncontacted Brazilian tribe from their village.

"First contact is always dangerous and frequently fatal — both for the tribe and those attempting to contact them," Survival International director Stephen Corry said in a statement. "The Indians' wish to be left alone should be respected."