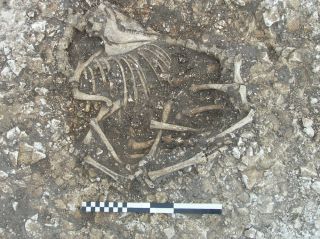 The skeleton of a sheep with two added legs. The extra legs came from another sheep, the researchers said.
(Image: © Copyright Bournemouth University)

Weird, "hybridized" animal skeletons, including a cow-horse and a six-legged sheep litter the bottom of storage pits in an Iron Age site in England, archaeologists have found. One pit even holds the bones of a woman with a slit throat laid on top of animal bones, the scientists said.

The unusual remains belong to an ancient people who lived in southern England from about 400 B.C. until just before the Roman invasion, in A.D. 43, said dig co-director Paul Cheetham, a senior lecturer in archaeology at Bournemouth University in the United Kingdom.

It appears that the people dug the pits to store food such as grain near their dwellings. They had "no decent way of refrigerating stuff" back then, and the chalky earth would have provided a cool storage area, Cheetham told Live Science. [See Photos of "Hybridized" Animal Sacrifices from Ancient England]

The people would have used each pit for only a year or two before digging a new one. Just before they abandoned a pit, it appears, the people buried a hybridized animal in it, sometimes with the flesh still attached, possibly as a way to honor the gods, Cheetham and his colleagues said. (When skeletons are well connected, or articulated, it indicates that the individual had ligaments and flesh holding it together when it was buried, the researchers said.)

These "hybrids" would have been formed from the body parts of various other animals.

"[They were] creating combinations of prized animals as an offering to particular deities," said dig co-director Miles Russell, a senior lecturer of prehistoric and Roman archaeology at Bournemouth University. "What this meant precisely to the tribes we don't know, as nothing sadly was written down from the period and we have no record of the names or nature of the gods being invoked."

The archaeologists found all kinds of mix-and-matched animals in the pits. Many contained combinations of horse and cow body parts — such as a cow skull with a horse jaw and a horse skull with a cow horn sticking out, resulting in something that looked like a bizarre unicorn.

Some pits contained man-made items, such as combs made from bone and weaving needles. Others held sheep and cow combinations and the entire bodies of sacrificed dogs and pigs. In one pit, the archaeologists found a sheep's body with a cow skull on its rear.

Such animal sacrifices are not to be taken lightly, the archaeologists said. Cows, sheep and horses were likely the basis of the economy and also a food source, "so to dispose of an animal like a pig is quite a big thing to do," Cheetham said.

Archaeologists also found the skeleton of a woman buried facedown on a bed of bones. A cut mark on her collarbone suggested someone had sliced her throat, Cheetham said.

"People were not buried in the Iron Age in this part of Britain," he said. "We don't know what they did with their bodies. They either cast them into water or exposed them," leaving them out in the elements.

So, like the hybridized animals, it's likely the woman was part of a ritual or sacrifice, Cheetham said. Furthermore, her body was laid over bones from cows, horses, sheep, pigs and dogs. Curiously, her legs are on top of the animals' rear limbs, while her pelvis covers their pelvises, and so on.

"It’s like she was an addition to this hybrid human animal," Cheetham said.

Archaeologists haven't named the Iron Age people who lived at the settlement, but the scientists did name the site "Duropolis," after the tribe, the Durotriges, that lived there from about 50 B.C. to the Roman invasion. The origin of the Durotriges people is unclear, but it's possible they came from mainland Europe, said Cheetham. [History's 10 Most Overlooked Mysteries]

The Durotriges tribe left a trove of artifacts, including pottery, coins and oval-shaped graves that held the tribe's dead, he said. However, it's unclear if the Durotriges merged with the Iron Age people (responsible for the hybridized animal pits), or if they displaced them. It's also possible that with cultural changes and the emergence of new ideas, these Iron Age people started new practices, such as oval burials and pottery, the researchers said.

Given the scant record, archaeologists are trying to learn as much as they can about the Iron Age people. The researchers have studied the region since 2009; they found the site with the hybridized animals just two months ago during a geophysical survey of a ploughed field, Russell said.

"The results, which showed an area of around 30 hectares [74 acres] of pits, roundhouses and ditches, was totally unexpected, no trace of it showing on the surface," Russell said.

So far, they've excavated 16 roundhouses and have about 200 more to uncover, he said. Each roundhouse is between 35 and 50 feet in diameter (11 and 15 meters), and the structures were likely covered with wattle and daub walls and thatched roofs during the Iron Age, Russell said.

The finding gives archaeologists a clearer idea about how Iron Age people in southern England organized their lives, including what they did, ate and stored, he said. It may also help researchers learn about the transition from pre- to post-Roman influence.

The site provides a perfect window into how the Roman invasion affected prehistoric Britain, Russell said. The scientists are planning to track the lifestyle and other changes that occurred after the Romans took over, he said. For instance, the hybridized animal pits date to the Iron Age, before the Romans arrived.

"When did religions, food, customs, houses and society start to change?" Russell said. "And when, if at all, did the native Britons become 'Roman?'"

Editor's note: The story was updated to reflect new evidence that the sheep with the cow’s skull on its rear did not have a decapitated head.