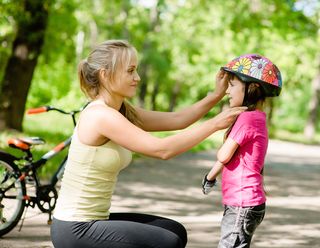 Moms who want to encourage their daughters to be active should practice what they preach, a small new study shows.

The study of 40 girls ages 5 to 12 found that those with more active mothers were more physically active themselves. And the more time a mom spent being sedentary, the longer her daughter spent in front of a screen.

"Mothers are the first potentially powerful female role model for their daughters, and their daughters' beliefs and behaviors may stem directly from those of their mothers," said study co-author Alyce Barnes, an education researcher at the University of Newcastle in Australia.

The findings were published online June 20 in Maternal and Child Health Journal.

Research shows that at every age, girls and women are less active than boys and men, and the activity gap increases with age, according to the new study. Some studies have found that active moms are more likely to have active daughters, and that mothers' levels of physical activity may have a stronger influence on girls than boys. [5 Myths About Women's Bodies]

To better understand how moms influence their daughters' physical activity, Barnes and her colleagues looked at mother-daughter pairs who had enrolled in a trial of a physical activity intervention. Both mothers and daughters wore accelerometers for seven days in a row, for at least 8 hours a day, to measure their physical activity levels. The mothers also reported the amount of time they spent in sedentary activities, as well as the amount of time their daughters spent being sedentary and doing screen time during a typical week.

About two-thirds of the mothers in the study were overweight or obese, and about 30 percent of the daughters were.

Daughters whose mothers had strong beliefs about the benefits of regular exercise spent more time doing moderate-to-vigorous physical activity, the researchers found.  And daughters with mothers who provided more logistical support for their physical activity — for example, enrolling them in sports programs, driving them to practice and watching them play — spent more time being active. The less logistical support a mother provided, the more time her daughter spent being sedentary.

The only factor associated with daughters' screen time was mothers' sedentary activity, according to the study.

"It is important for mothers to lead by example and engage in active pursuits rather than sedentary behaviors such as sitting engaging in small screen recreation (i.e. television, computer and tablet use)," Barnes said in an e-mail to Live Science.

"It is important for mothers and daughters to participate in physical activities they find fun and enjoyable," such as social sports, going for walks or bike riding, she added.

People can also aim to get physical activity into their everyday lives, for example, by parking farther away from a destination and walking, taking the stairs instead of the elevator, or tracking your steps with a pedometer, she said.