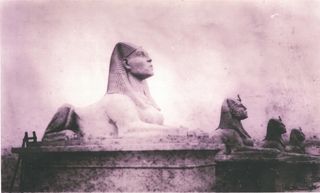 After spending more than 90 years in the sandy dunes of Guadalupe, California, a majestic plaster Hollywood sphinx, created for the 1923 blockbuster silent film "The Ten Commandments," is making its 21st century debut.

Researchers excavated the fragile plaster of Paris sphinx from the dunes in 2014, and let it dry for several months before art restorers used Elmer's Glue to piece it back together. It's now housed at the Guadalupe-Nipomo Dunes Center in Southern California, and goes on display for the public tomorrow evening (June 12).

"It's been pretty phenomenal," said Doug Jenzen, the executive director of the Guadalupe-Nipomo Dunes Center. "We're putting the final touches on the exhibit right now." [See Photos of the Old and Refurbished Hollywood Sphinxes]

The sphinx and its companions were the brainchild of director Cecil B. DeMille and his film crew. The silent movie had an enormous set to show the grandeur of Pharaoh's City, which was lined with 21 regal sphinxes, each standing 35 feet (11 meters) tall when they were on their pedestals.

Artifacts left by the crew suggest they had a good time on the set while making the movie. Archaeologists found tobacco tins and medicine bottles — the latter likely a ruse that carried moonshine because "The Ten Commandments" was filmed during America's Prohibition Era (1920-1933), when alcohol wasn't allowed, Jenzen said.

After filming ended, the crew apparently left the movie set to the elements. The statues were weathered by the rain, fog and wind and eventually buried by the sand on the ever-shifting dunes.

"In the process of putting [the sphinx] back together, the art restorer also found graffiti on it that said 'May 1930,'" Jenzen told Live Science. "It corresponds to all of the photos we have of people in the 1930s going out to the dunes and posing with these Egyptian statues that are sticking out of the sand."

The researchers also found evidence that people used the sphinxes for target practice, Jenzen said. They also uncovered a burned piece of toast, likely from an uneaten 1920s sandwich.

"Somehow this piece of toast made it through the elements of being exposed," Jenzen said. "It's definitely not edible anymore."

"The minute the plaster statuary is exposed to the humidity in the air, it turns to mush and crumbles," Jenzen said. "So you need to have a team of people there who are able to pull the sand away and excavate it all simultaneously."

But hiring a large crew of people is expensive; the small team involved only had time to excavate part of the sphinx — half of its chest and hind legs. [Photos: Uncovering Sphinxes from 1923 'The Ten Commandments']

They also excavated it in a very California-like way. They wrapped the plaster in foam and pillows to protect it, and the placed it on plywood that had surfboards underneath it.

"The surfboards acted as sleds," Jenzen said. "It's an ecologically sensitive area and we couldn't have any cars or vehicles on it."

They let the partial sphinx sit inside for several months, letting it dry out and shrink to its original size. Then, restorers spent about five weeks piecing the chucks together with Elmer's Glue, largely because it's reversible, said Amy Higgins, an art restorer who worked on the sphinx.

In the meantime, researchers took a trip to the Academy of Motion Picture Arts and Sciences in Beverly Hills, and ended up looking through about 1,500 photographs that DeMille had taken of the set so they would have a better idea of the sphinxes' production, Jenzen said.

"There's one picture that we found, it's kind of funny. It's a bunch of guys going to work one morning out in the dune, and the whole dune was just littered with sphinx parts."

The new exhibit will show photos from the Academy of Motion Picture Arts and Sciences, as well as the sphinx body, and a sphinx face and paw.

After seeing the exhibit, enthusiasts may also want to see "The Lost City of Cecil B. DeMille," a new movie about the making of the movie by Peter Brosnan, Jenzen said. They can also see a paw of another sphinx that the researchers mailed to the U.S. Department of the Interior's POP! Exhibit in Washington, D.C., he added.