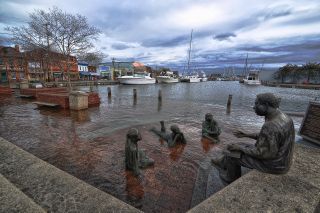 One of the biggest fears about climate change is that it may be triggering events that would dramatically alter Earth as we know it.

Known to scientists as "tipping events," they could contribute to the mass extinction of species, dramatic sea level rise, extensive droughts and the transformation of forests into vast grasslands — among other upheavals our stressed world can ill afford.

The melting of the Arctic's summer ice is considered to be the single greatest threat, and some scientists think we've already passed the tipping point. As sea ice melts and the Arctic warms , dark ocean water is exposed that absorbs more sunlight, thus reinforcing the warming. The transition to an ice-free Arctic summer can occur rapidly — within decades — and this has geopolitical implications as nations compete for the newly opened space and petroleum resources. Added to all that will be the damage that would result from the disruption of an entire ecosystem.

The warming of the Arctic may also render Greenland largely ice free. While Greenland's ice loss will likely reach the point of no return within this century, the full transition will take at least a few hundred years. The impacts of the Greenland ice melt is expected to raise sea levels by up to 20 feet. Half of the 10 largest cities in the world, including New York City, and one-third of the world's 30 largest cities are already threatened by this sea-level rise. Today, those cities are home to nearly 1.8 billion people. Other vulnerable American cities include Miami, Norfolk and Boston.

On the other side of Earth, the West Antarctic ice sheet is also disintegrating . Because the bottom of this glacier is grounded below sea level, it's vulnerable to rapid breakup, thinning and retreat as warm ocean water eats away at the ice. Scientists expect the West Antarctic ice sheet to "tip" this century, and there is evidence that it already began happening in 2014. However, the entire collapse of the glacier, which would raise sea level by 16 feet, could take a few hundred years.

The oceans absorb about 90 percent of the extra heat that is being trapped in the Earth system by greenhouse gases. This could affect the ocean dynamics that control El Niño events. While there are several theories about what could happen in the future, the most likely consequence of ocean heat uptake is that El Niño, a natural climate phenomenon , could become a more permanent part of our climate system. That would cause extensive drought conditions in Southeast Asia and elsewhere, while some drought-prone areas such as California would get relief. While the transition to a world with more El Niños is expected to be gradual and take around one hundred years, the event could be triggered during this century.

5. The Amazon rainforest dies back

Deforestation, a longer dry season and rising summer temperatures are threatening the amount of rainfall in the Amazon. At least half of the Amazon rainforest could turn into savannah and grassland. Once that event is triggered, the changes could happen over just a few decades. This would make it very difficult for the rainforest to reestablish itself and would lead to a considerable loss in biodiversity. However, the reduction of the Amazon ultimately depends on what happens with El Niño, along with future land-use changes from human activities.

6. Boreal forests are cut in half

Increased water and heat stress are taking a toll on the large forests in Canada, Russia and other parts of the uppermost Northern Hemisphere. So are their vulnerability to disease and fires. This could lead to a 50 percent reduction of the boreal forests — an event from which they may never be able to recover. Instead, the forest would gradually transition into open woodlands or grasslands over several decades. This would have a huge impact on the world's carbon balance because forests can absorb much more carbon than grasslands can. As the forest diminishes, the climate will be affected — as will the Earth's energy balance. However, the complex interaction between tree physiology, permafrost and fires makes the situation tricky to understand.

As if that's not enough, there are a few other tipping events that scientists are also concerned about, but they are even more complex and harder to predict. Examples of such events include the greening of the Sahara and Sahel deserts, the development of an Arctic ozone hole and a chaotic Indian summer monsoon.

How do we keep from tipping over?

We know from measurements that the Earth has had many climate-related tipping events throughout its history. Today's situation is different, because humans are now driving these changes and the warming is occurring at a faster rate.

But as humans we also have the power to change the trajectory we're on — and possibly turn the situation around in only a few years.