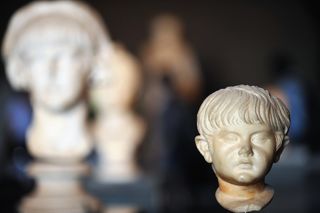 A bust of Emperor Nero, who married a man, according to historians.
(Image: © Pete Klimek | Shutterstock.com)

Several U.S. Supreme Court Justices asked for a history lesson on same-sex marriage last week, but the answers they got were far from complete, experts say.

Three of the nine justices asked for a legal precedence of same-sex marriage, when they listened on April 28 to arguments on whether the institution should be, in essence, legal and recognized countrywide. Chief Justice John Roberts raised the question of precedence, saying, "Every definition that I looked up, prior to about a dozen years ago, defined marriage as unity between a man and a woman as husband and wife," according to court transcripts.

Justice Samuel Alito added, "as far as I'm aware, until the end of the 20th century, there was never a nation or a culture that recognized marriage between two people of the same sex." He later added, "There have been cultures that did not frown on homosexuality," such as ancient Greece, but they still didn't accept gay marriage, as far as he knew. [10 Milestones in Gay Rights History]

During an exchange with Mary Bonauto, one of the lawyers arguing for the plaintiffs, who are in favor of same-sex marriage, Justice Antonin Scalia said, "But I don't know of any — do you know of any society, prior to the Netherlands in 2001, that permitted same­-sex marriage?"

Bonauto answered that, as a legal matter, she did not.

In fact, same-sex marriage has happened throughout the ages, although some cultures might view it through a different lens, experts told Live Science.

Here's a look at a few of these unions from cultures around the world, including ancient Rome, Native American people in the American Plains and pre-colonial Africa.

Emperor Nero (ruled A.D. 54 to A.D. 68) castrated a boy named Sporus to make him womanlike, and then married him in a traditional ceremony, which included a bridal veil and a dowry, according to the Roman historian and biographer Suetonius (circa A.D. 69).

Emperor Elagabalus (ruled A.D. 218 to A.D. 222) married Zoticus, a famous male athlete, and referred to his slave, a man named Hierocles, as his husband, Abbott said.

There are also texts referring to lesbian relationships, but not marriages, in ancient Rome, Abbott said. Perhaps these women did not have enough power or influence to actually marry, she said.

"Wealthy, powerful men in ancient Rome could do it, and find ways of doing it because they were rich and powerful," Abbott told Live Science. However, it doesn't appear that same-sex marriage was widespread in ancient Rome.

"In other words, it was a thought people had," Abbott said. "But there were very few people who were actually able to do it."

In another instance, some Native American peoples, such as the Crow, participated in same-sex marriages, although their culture likely viewed it another way, said Helen Boyd, a lecturer of gender studies at Lawrence University in Wisconsin.

Some Native American societies accepted the idea that some people have "two spirits" (the term "berdache" is also used, but some people consider it offensive). People with two spirits had both maleness and femaleness inside of them, and could marry someone who was the same biological sex, Boyd said. [10 Wedding Traditions from Around the World]

For instance, a biological male with two spirits could live as a woman and marry a man, Boyd said.

Across the world, there were societies in pre-colonial Africa that permitted women to marry other women. These marriages typically helped widowed women who didn't want to remarry a man or return to their family or their husband's family after the husband's death, according to a 2009 research article published in the journal Global South by Marc Epprecht, the professor and head of global development studies at Queens University in Canada.

Instead, the widow could pay a bride price and perform other rituals needed to marry another woman, Epprecht said.

The widow would then act as the husband in the relationship, and preserve her inheritance and family lineage, Epprecht said. Another man could impregnate the widow's wife, but he would have no claims on the child. Instead, the woman-woman duo would raise the child, Epprecht said.

"A central thing in African political and social thought is belonging to someone," said Thomas McClendon, a professor of history at Southwestern University in Texas. "You're someone's daughter or son, and you eventually become an ancestor when you die.

"It's important to have descendants," McClendon said. "This is a way in which women could achieve that status even if they didn't have a husband."

There are other examples of same-sex marriage: The Muxe of southern Mexico were biological males who lived as women and were allowed to marry men; the Fa'afafine of Samoa have a similar setup, as do the Hijra in India and Pakistan, and the Kathoey in Thailand, Boyd said.

"Westerners tend to put these people in the 'gay' box, so their marriages are — to our eyes — same-sex marriages, even though they are, more specifically, marriages between two differently gendered people," Boyd said.

There have always been gay people, and they've often married, "just not to each other," Abbott said.

"In my marriage book, I talk about the terrible, the dire consequences of forcing people to marry against their instincts, their orientation," Abbott said. "Historically, you had lots of unhappy marriages, probably for that reason."