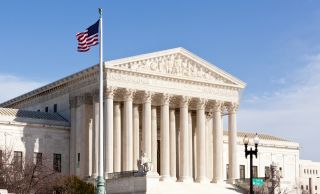 The Supreme Court may soon decide whether gay marriage becomes the law of the land.

The nine justices heard oral arguments yesterday (April 28) on whether same-sex marriage is a constitutional right. The case, Obergefell v. Hodges, will determine whether states have the right to ban same-sex marriage or refuse to recognize the unions of same-sex partners forged in other states.

Currently, same-sex marriage is legal in 37 states, with 13 states banning the practice by constitutional amendment or state law. Many states that ban gay marriage do not recognize same-sex marriages performed in other states.

Here are the basics of the case and it's impact:

What is the case about?

Obergefell v. Hodges is actually a consolidation of six cases that were denied by a U.S. appeals court in Kentucky, in conflict with the rulings of other courts across the country. The case focuses on whether gay marriage bans violate the 14th Amendment's equal protection clause, which states that no state shall "deny to any person within its jurisdiction the equal protection of the laws." The court will answer two questions: Can states ban same-sex marriages? And can states that ban same-sex marriage refuse to recognize the marriages of same-sex couples legally married in another state? [Same Sex Marriage: 6 Effects About the Supreme Court Case]

Who are the plaintiffs?

The case has 32 plaintiffs, who filed six separate lawsuits in their home states of Kentucky, Tennessee, Michigan and Ohio.

One case involves April DeBoer and Jayne Rowse, who have lived together for 10 years and have three adopted kids. The pair would like to get married but their state of residence, Michigan, prohibits same-sex marriage.

James Obergefell is arguing that his marriage to partner John Arthur on a tarmac in Maryland, where same-sex marriage is legal, be recognized in Ohio where the two lived and Obergefell still lives. Arthur died from amyotrophic lateral sclerosis (ALS), also known as Lou Gehrig's disease, a few months after the marriage ceremony.

Army Reserve Sgt. First Class Ijpe DeKoe and Thomas Kostura married in New York, where same-sex marriage is legal; Sgt. DeKoe has since deployed to Afghanistan and returned. The couple is asking that their marriage in New York be recognized by Tennessee, where DeKoe is now stationed, and the couple now resides. DeKoe said the refusal of Tennessee to recognize his marriage is "particularly painful," because "he is denied the very freedom, liberty and equality that he risked his life to protect," according to the SCOTUS blog on the case.

What are the plaintiffs' arguments?

The plaintiffs are arguing that they should be given equal access to the constitutional right to marriage, something the court has long stated is a fundamental right. Plaintiffs also argue that same-sex marriages won't undermine straight marriages, which are about more than just making babies.

"One casualty of the marriage litigation is an impoverished view of what is marriage, and what is the role of biological procreation. The state's entire premise here is that, if same-sex couples marry, then different-sex couples won't and [won't] have their children in a marriage. Those two could not be further apart," said the plaintiffs' lawyer, Mary L. Bonauto.

Finally, the couples' lawyers argue that having the right to marry bestows fundamental human dignity on a couple, so denying that right is harmful to them and may actually disrupt familial bonds with children.

"Excluding gay and lesbian couples from marriage demeans the dignity of these couples," said Solicitor General Donald Verrilli Jr., during oral arguments. "It demeans their children, and it denies … both the couples and their children the stabilizing structure that marriage affords." [10 Scientific Tips for Raising Happy Kids]

What are the states' arguments?

The states argue that deciding marriage law is a state's-rights issue, and that taking that right away is an infringement on liberty. They further argue gay marriage prohibitions are based on rational arguments, not malice toward gays and lesbians. The court has long held that laws must be "rationally related to a legitimate governmental interest," but not necessarily that the rationale must be correct, according to the SCOTUS blog.

In essence, gay marriage would fundamentally change the institution of marriage, which has been in place for millennia, and that could have unintended consequences, said John J. Bursch, the solicitor general of Michigan. As an example, Bursch argued that no-fault divorce laws may have changed the nature of marriage and led to a rise in single parenthood. From this point of view, the purpose of marriage is tying biological parents together to encourage them to responsibly rear their children, and that supporting gay marriage could undermine that message.

"The state's entire interest springs out of the fact that we want to forever link children with their biological mom and dad when that's possible," Bursch said in oral arguments. The states are not disputing that gay couples can be good parents.

Has the Supreme Court heard other cases on same-sex marriage?

Yes. Two years ago, the Supreme Court heard oral arguments in Hollingsworth v. Perry, which was a culmination of several legal cases against Prop 8 — an amendment to the California Constitution stating that only marriage "between a man and a woman is valid or recognized in California." Though the court never ruled on the constitutionality of the same-sex marriage ban, five of the nine Supreme Court Justices agreed that supporters of the ban lacked standing (or legal right) to defend Prop 8.

On that same day, the court issued its opinion on United States v. Windsor, in which the justices considered whether denying federal benefits to same-sex couples, a provision in the 1996 Defense of Marriage Act (DOMA), violated the equal protection clause of the U.S. Constitution. The court struck down that provision, allowing same-sex couples the same federal benefits as married couples, regardless of the legality of such a marriage in the state.

What is the likely outcome?

So far, the justices seem to be sharply divided. Most experts expect that the liberal wing of the court, which includes Justices Sonia Sotomayor, Elena Kagan, Ruth Bader Ginsburg and Stephen Breyer, will vote in favor of a constitutional right to same-sex marriage; meanwhile, three conservative justices, Antonin Scalia, Clarence Thomas and Samuel Alito, are expected to rule in favor of the state bans. The opinions of Justices Anthony Kennedy and Chief Justice John Roberts are less predictable, though many analysts predict that Justice Kennedy will rule in favor of a constitutional right to gay marriage.

What would the ruling mean for the plaintiffs?

Since Michigan laws prohibited DeBoer and Rowse from jointly adopting their children, DeBoer adopted one child and Rowse the other two. Being "single" parents, one mother's health insurance could not cover the other's child and vice versa; in addition, if one mother died, the other would not automatically receive custody of the deceased partner's child.

What about the rest of the country?

Gay marriage would become legal in the 13 states that currently ban it if the court rules in favor of the plaintiffs.