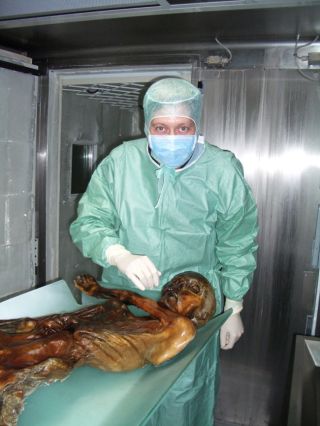 Researchers have sequenced the Iceman's genome and hope to be able to locate any living descendants.
(Image: © Copyright Elsevier)

Before his body froze and mummified, a now-famous Neolithic guy dubbed the Iceman took his last steps while donned in a coat and leggings made of sheep's fur and moccasins made of cattle leather. That was more than 5,000 years ago.

The 45-year-old man apparently trekked up the Schnalstal glacier in the Italian Alps before dying, and a new study reveals more about how he lived.

The body of the Iceman (also called Ötzi, Frozen Fritz and Similaun Man) was discovered in 1991 by accident by German tourists and made headlines around the world. At first he was thought to have died recently.

Since then, the ancient mummy has undergone a slew of examinations from which scientists have gleaned bits of information about the man’s last steps on Earth, ranging from his last meal (unleavened bread and meat) to the cause of death. The most recent verdict is the Iceman died of head trauma.

Still, questions have abounded regarding Ötzi's occupation, and the new findings provide clues.

"There is a long lasting debate about the socio-cultural state of Iceman's society," lead researcher Klaus Hollemeyer of Saarland University in Germany told LiveScience. "One fraction says he belongs to the gatherer-hunter society, which is more primitive than the more progressive pastoral-agricultural society which followed after."

While clothing made from domesticated animals would support him being a herdsman (pastoral-agricultural society), attire made from wild animals could suggest a hunter-gatherer, the researchers say. Although his clothes were known already to be made of animal skins, their exact origin was uncertain, with previous studies revealing conflicting results.

The new clothing discovery, detailed today in the journal Rapid Communications in Mass Spectrometry, supports the idea that the Iceman herded sheep, cattle and perhaps goat.

The researchers used a mass spectrometer, which measures the heft and concentrations of atoms and molecules, to look for various proteins in hair samples taken from the Iceman's clothing, comparing the results with proteins from the hairs of modern-day animals, including goat, sheep, elk, wild boar and caribou.

"We found that the hairs came from sheep and cattle, just the types of animals that herdsmen care for during their seasonal migrations," Hollemeyer said.

Next, Hollemeyer hopes to use the same technique to analyze the fur from the Iceman's cap and soles of his shoes.