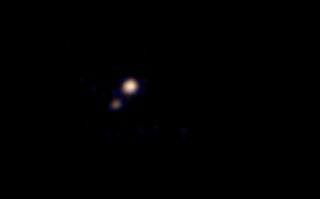 NASA's New Horizons mission to Pluto has returned its first color image of the dwarf planet and its largest moon, Charon.

The new photo, taken on April 9 from a distance of about 71 million miles (115 million kilometers), is already revealing insights about Pluto and Charon, as well as suggestions of the science to come when New Horizons flies by the Pluto system on July 14, NASA officials said.

The image reveals "tantalizing glimpses of this system," Jim Green, director of NASA's Planetary Science Division, said during a news conference Tuesday (April 14), the day the photo was released. [Photos of Pluto and Its Moons]

"You can immediately see a number of differences" between Pluto and Charon, Green added.

For example, Charon is dimmer than Pluto. The contrast may be due to a difference in composition of the two bodies, or it could even be caused by a previously unseen atmosphere on Charon, Green said. The uncertainty should clear up this summer, when New Horizons gets history's first good look at the two frigid, faraway objects.

Pluto is getting its first close-up decades after planets such as Venus, Mars and Neptune received theirs. The delay means New Horizons is able to bring some pretty advanced scientific gear to the job.

New Horizons "is a real 21st century exploration spacecraft, with tremendous capability," mission principal investigator Alan Stern, of the Southwest Research Institute in Colorado, said during Tuesday's news conference. "It is in perfect health, full of fuel and carrying a scientific arsenal — the most powerful suite of science instruments ever brought to bear on the first reconnaissance of a planet."

One of those is the Ralph color imager, which captured the new color photo of Pluto and Charon.

A new class of planets

In the early days of planetary exploration, there were two broad categories of planets — the rocky terrestrial planets from Mercury to Mars, and the enormous gas giants of Jupiter and beyond. Pluto was classified as a planet, but it was something of an oddball at the outer edges of the solar system.

Over the past few decades, it has become increasingly clear that Pluto is not so odd after all. In fact, it is just one of many similar objects in the Kuiper Belt, the ring of icy bodies beyond Neptune's orbit.

When the New Horizons mission began taking shape, scientists knew about only one moon of Pluto — Charon, which is nearly 50 percent as wide as the dwarf planet. Since then, astronomers have used the Hubble Space Telescope to discover four additional — and much smaller — moons around Pluto.

There may be yet more moons waiting to be discovered, as well as a ring system or debris fields around Pluto. Such features could present a collision risk to New Horizons, but mission team members aren't too concerned.

"As we did more testing of the spacecraft components back on Earth, our degree of concern declined with time," Stern said. "The probability of something severe happening to New Horizons is very low —significantly less than 1 percent — around one in 10,000."

That doesn't mean the team is taking potential dangers lightly. They've worked out alternate paths for the spacecraft to take if it appears to be in danger.

"We want to make sure we've taken every precaution to have a successful mission with New Horizons," Stern said.

'Flying into the unknown'

New Horizons, which launched in January 2006, will be one of five spacecraft to visit the outer edges of the solar system, following in the footsteps of NASA's Pioneer 10 and 11 and Voyager 1 and 2 probes.

New Horizons will be the only spacecraft to make a close approach to Pluto, traveling within 7,767 miles (12,500 km) of its surface. The dwarf planet takes 248 Earth years to make one trip around the sun. That means that one Pluto-year ago, Saturn was the most distant known planet; Neptune and Uranus had not been discovered yet.

Images and information sent back from the spacecraft will take about 4.5 hours to reach Earth, despite traveling at the speed of light. This means that many of the observations that will be mae by New Horizons are scripted before it reaches Pluto. Furthermore, the spacecraft must choose between making new observations and sending its existing data to Earth; it can't do both at the same time.

"It is one of the most automated planetary spacecraft ever launched," Green said.

For most of its trip, New Horizons remained in hibernation, waking up periodically to check that all systems remained functional and to occasionally study other planets as it passed them by. But in December, New Horizons received its last wakeup call, and began to collect information about the solar wind in the Kuiper Belt region approaching Pluto.

Discoveries about Pluto and its moons should begin long before the closest approach in July. Stern called the approach a six-month encounter that began in January. After flying by the system, New Horizons will turn around and attempt to study the dark side of Pluto by the light of its largest moon.

The $700 million New Horizons mission offers an opportunity to study Pluto and its five moons in detail, capturing data about the dwarf planet's atmosphere, composition, interior, and formation. New Horizons will provide the first detailed look at a previously unexplored body in the solar system.