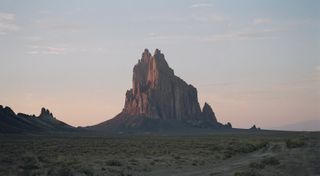 A methane "hot spot" over the Four Corners region of the U.S. Southwest is undergoing serious scrutiny as scientists work to figure out why levels of the gas in the area are so high.

The mysterious methane was first detected from space, via a European Space Agency satellite that can measure this potent greenhouse gas. Researchers reported the discovery in October in the journal Geophysical Research Letters, but couldn't explain where the extra methane was coming from. The "hot spot" persisted from 2003 until at least 2009. And the amount of methane was significant, the researchers reported — equal to nearly 10 percent of all U.S. methane emissions from natural gas.

Now, a team of researchers is tackling the mystery of the extra methane. The scientists will fly two Twin Otter aircraft over the Four Corners area, where the borders of Colorado, New Mexico, Utah and Arizona meet. These planes will carry two instruments: the Next-Generation Airborne Visible/Infrared Imaging Spectrometer (AVIRISng), which can detect and map methane in great detail, according to NASA's Jet Propulsion Laboratory; and the Hyperspectral Thermal Emission Spectrometer (HyTES).

This second instrument is sensitive to methane emissions and will be used to survey and measure suspected methane emissions sites. By combining the data from these two instruments, the researchers hope to make maps that will show methane variations over every few feet of the region. They also plan to track the emissions over several months to determine how weather conditions influence methane levels. [Gallery: See Images of Amazing Atlantic Methane Seeps]

"With all the ground-based and airborne resources that the different groups are bringing to the region, we have the unique chance to unequivocally solve the Four Corners mystery," Christian Frankenberg, a scientist at NASA's Jet Propulsion Laboratory, said in a statement. (The new effort is a collaboration among JPL; the Cooperative Institute for Research in Environmental Sciences, or CIRES, in Boulder, Colorado; the National Oceanic and Atmospheric Administration, or NOAA; and the University of Michigan, Ann Arbor.)

The trail is not entirely cold. The timing and persistence of the hot spot suggests the methane may be coming from gas extraction, coal mining, and coal-bed methane mining and processing in the region, the researchers reported in their paper on the discovery in the Geophysical Research Letters journal. Naturally occurring gas seeps are another possibility, NASA said.

If the methane hot spot is man-made, the measurements researchers make in the coming months over Four Corners could help reduce the emissions.

"If we can verify the methane detected by the satellite and identify its sources, decision-makers will have critical information for any actions they are considering," CIRES scientist Gabrielle Pétron said in the statement.