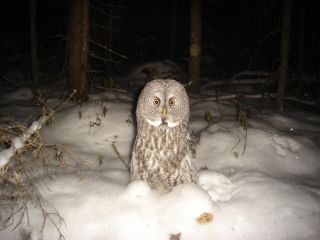 Camera-trap photos can transport you to wild scenes you would likely otherwise miss. In celebration of that tool, the Wildlife Conservation Society’s photo blog, Wild View, has held a competition to highlight the technique, with the winner to be announced in early April. Until March 31, you can vote at Wild View for one of the six finalists — out of 43 submissions — from the gallery below.

Leopards and a crocodile stand their ground at a small river in Niassa Reserve, Mozambique. Jamie Wilson used a Bushnell camera for the shot. (Credit: Jamie Wilson.)

An 8-point buck and a coywolf face off in Wilmington, Massachusetts. Mark Holleran used a Moultrie M-1100i game camera for his camera trap. (Credit: Mark Holleran.)