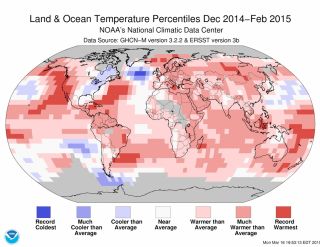 This winter may have brought a deep freeze to much of the northeastern United States — including record-breaking snowfall in Boston — but it was the planet's warmest winter on record, climate scientists announced yesterday (March 18).

The average global temperature from December to February was 1.42 degrees Fahrenheit (0.79 degrees Celsius) higher than the 20th-century average of 53.8 degrees F (12.1 degrees C), according to a newly released report from the National Oceanic and Atmospheric Administration's (NOAA) National Climatic Data Center.

Last month was also the second-warmest February on record, according to NOAA. The average global temperature across land and oceans last month was 1.48 degrees F (0.82 degrees C) higher than the 20th-century average, making only February 1998 warmer, NOAA officials said.

But the report also noted colder-than-average temperatures in February across the central and eastern United States — similar to the wintry conditions seen in the region at the same time last year.

"In February 2015, cooler to much-cooler-than-average conditions overtook the entire eastern half of the United States and the eastern third of Canada, with some record-cold pockets seen around the Great Lakes region and part of northeastern Canada near Hudson Bay," NOAA scientists wrote in the report.

Yet, that was not the case for much of the globe.

"The majority of the world's land surfaces, however, were warmer than average, with much-warmer-than-average temperatures widespread across Central America, northern and central South America, Australia, most of Africa, and much of Eurasia, including a broad swath that covered most of Russia," the NOAA report states.

Earlier this year, scientists at NOAA and NASA announced that 2014 was the hottest year since record keeping began in 1880. Their report showed that every continent set heat records last year, with temperatures over land and oceans breaking the previous records set in 2005 and 2010.

Human-caused global warming, from emissions of greenhouse gases, is a major contributor to the continued rise in global temperatures, scientists have said.

"It's greenhouse gases that are responsible for the majority of the long-term trend," Gavin Schmidt, director of NASA's Goddard Institute for Space Studies in New York, said during a news conference in January, when the report on 2014 temperatures was released.