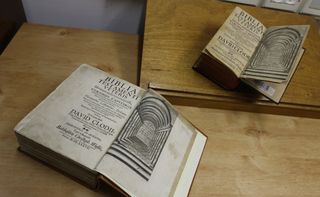 The twin Tanachim (the plural of Tanakh) are shown side by side, with the newfound copy on the bottom. As with all Hebrew books, they open from right to left.
(Image: © Courtesy of the University of Haifa)

A rare, 338-year-old copy of the Old Testament has been reunited with its twin, a copy of the same edition that was printed in Frankfurt, Germany, in the 1600s.

The biblical text's journey was long and circuitous. After its publication in 1677, the book bounced among scholars, landed in Egypt and finally fell into the hands of Micha Shagrir, an Israeli film producer and director. Shagrir died in February, but his family recently donated the text to the University of Haifa in northern Israel, which already has a near-duplicate copy of the rare text in its collection, according to a statement from the university.

The Old Testament is also known as the Tanakh, an acronym that includes the Torah (the five books of Moses), Nevi'im (prophets) and Ketuvim (writings) — or TaNaKh. [The Holy Land: 7 Amazing Archaeological Finds]

However, the newfound Tanakh wouldn't have graced synagogues, said Yossi Ziegler, academic director of the University of Haifa's Younes and Soraya Nazarian Library.

"It is a Tanakh which was produced not for Hebrew readership," Ziegler told Live Science. "It was produced for, I assume, Christian scholars interested in the Hebrew text and wishing to have access to the best version of it."

In the 16th and 17th centuries, a group of Christian theologians in western Europe wanted to read and study the Tanakh in its original Hebrew, as opposed to the vernacular language of their region. "They were keen to learn Hebrew and to have access to the original text, which they used to explain [parts] in their text which they couldn't understand," Ziegler said.

David Clodil (1644-1684), a renowned German Lutheran, wrote a commentary for the book, and produced and edited it for his academic audience. Clodil included Hebrew numbers, as well as Arabic numerals, to help his readers navigate the text, Ziegler said.

The title page, in Latin, identified Clodil as "Professor Ordinarius of Oriental Languages and Professor Extra-Ordinarius of Theology at Alma Mater Giessen," said Ziegler, who translated it into English.

The university's library has another, smaller copy of the same Tanakh, but the volumes are slightly different. The library's copy has almost no margins, but the newfound copy has ample space for scholars to write notes in its margins, Ziegler said. [Gallery of Dead Sea Scrolls: A Glimpse of the Past]

In fact, the donated copy has numerous marginalia scrawled throughout it in German and Latin, and was used by no fewer than 10 different readers in the 17th and 18th centuries, Ziegler said.

Before he passed away, Shagrir decided to donate the Tanakh to the University of Haifa. Ziegler thanked him, and asked Shagrir to share the story of how he came into possession of such a rare book.

The story began in 1977, a month after then-Egyptian President Anwar Sadat visited Israel. Shagrir said that he and a group of Israelis made a secret trip to Egypt, and happened to visit an antique bookstore in Cairo during their stay.

The owner of the store wasn't Egyptian, but Armenian. He recognized Shagrir, and told the filmmaker he admired a film Shagrir had produced about the Armenian genocide.

To show his thanks, the shopkeeper gave Shagrir a wrapped book, and asked him not to open it until he had returned to Israel. Shagrir agreed, and was shocked to find the ancient Tanakh when he opened the package.

Shagrir kept the book for years, but he and his family reached out to the University of Haifa when he became ill, and offered to donate the book to the collection. The National Library of Israel in Jerusalem also has one or two copies from the same edition, and Shagrir wanted the Tanakh to be available in different parts of the country, Ziegler said.

"It's a touching story, and it's part of the history of Israel," Ziegler said.

The book is now in the university's rare-book collection and is available to anyone who wants to check it out, he said.