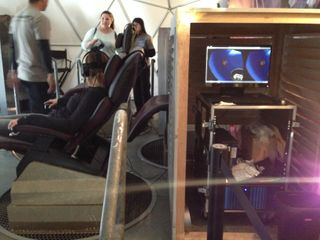 Chairs at this years South by Southwest Interactive are set up to allow users to feel what it's like to zoom into a wormhole.
(Image: © Tia Ghose)

AUSTIN, Texas — What if you could feel the weightlessness of drifting in space, without leaving the ground?

To try it out, I strapped on a virtual-reality (VR) headset and headphones today (March 13) here at the South by Southwest Interactive conference. The demonstration gives people a small taste of weightlessness by putting them in a chair filled with hydraulics while a VR headset transports them into the spaceship from the movie "Interstellar," just as it enters a wormhole that induces zero gravity.

Initially, the virtual-reality headset made me woozy, and it got even worse when I turned my head too quickly. But I soon became immersed in the virtual environment, and the wooziness subsided.

A few minutes into the simulation, as we entered the wormhole, a robot narrator warned that we were entering a zero-gravity environment. The hydraulics in my chair changed their pressure and lowered the base of the chair, which did create a vague sensation of floating. Oddly, the sensation was strongest in my arms and legs, but my internal organs still felt like they were subject to plain old Earth gravity.

The experience was pleasant and slightly otherworldly, but I doubt it truly mimics what it's like to be in space. People who are interested in experiencing the zero-gravity simulation can check it out at the conference starting tomorrow (March 14) at the conference.