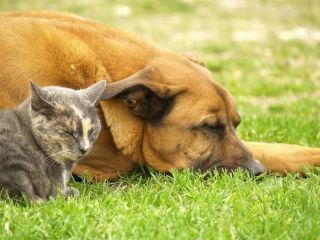 Canines and felines do best together if introduced when young. And they can even learn each other's body language.
(Image: © Dreamstime)

Humankind's two best friends don't always fight like cats and dogs, a new study shows. When living under the same roof, the alleged antagonists often get along swimmingly, in fact—especially if they're introduced at a young age.

Neta-li Feuerstein and her graduate advisor, Joseph Terkel of Tel Aviv University, surveyed 170 Israeli households with both a cat and a dog as pets. Two-thirds of the households reported an amicable relationship between the species. Indifference prevailed in a quarter, and less than a tenth reported fighting.

What's more, Feuerstein and Terkel found that the animals learned to understand each other's body language—even those signals that convey opposite meanings for the two species. When a dog averts its head, for example, it normally expresses submission; but a cat's averted head can signal aggression. From video recordings of cat–dog interactions in forty-five of the households, Feuerstein and Terkel found that four times out of five, each animal reacted to its companion's behavior according to the other's native code.

The research was detailed in the journal Applied Animal Behaviour Science.