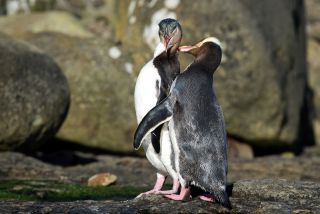 Bones left behind by a penguin that was eaten to extinction reveal that a remarkably fast turnover in species occurred after Polynesian seafarers wiped out New Zealand's weird wildlife, a new study reports.

Archaeological evidence has already confirmed the first humans to arrive in New Zealand treated the islands like a giant buffet. Seals and sea lions were on the menu, but the main course was giant birds. With no land mammals present in the area before humans arrived, birds ruled the islands, with a huge predatory eagle at the top of the food chain.

The first Pacific Islanders arrived in the late 13th century, and within 200 years, about 40 percent of the islands' bird species had vanished, studies show. Rats traveling with the settlers drove the extinction of smaller bird species, while human hunters vanquished the megafauna, including the nine species of large, flightless moa. [Wipe Out: History's Most Mysterious Extinctions]

"These extinctions and recolonizations are quite a unique thing in the fossil record, and the speed is quite unique as well," said lead study author Nic Rawlence, a paleoecologist at the University of Otago in New Zealand.

Rawlence said he suspects that yellow-eyed penguins were always washing up in New Zealand, but could never establish a population because the waitaha penguins outcompeted them. Although the yellow-eyed penguin is an endangered species today, with only about 7,000 individuals alive, they have a wide range centered on the Campbell and Auckland islands near Antarctica.

"The population [in the 1500s] would have been quite healthy to produce a lot of vagrants to come to New Zealand," Rawlence said.

But how did the interlopers survive the hunters?

It turns out that people on the South Island nearly went extinct from their own voracious appetites. The human population crashed around 1500 , and the Polynesian-Maori people abandoned the southern third of that island. At the same time, the humans changed their diet. Instead of subsisting on food from the land, they got most of their protein from fish and shellfish.

"What we think changed is all the big animals were killed off," Rawlence said. The islanders then retreated north because sweet potatoes, a staple food, can't grow south of what is now Christchurch, he said.

But even without human pressure, the yellow-eyed penguins, which are adapted to a colder climate, never took over the wide swaths of beach previously inhabited by the waitaha penguin.

Rawlence and his colleagues are now studying the population patterns of other species to look at the influence of hunting, habitat destruction and climate on New Zealand's lost creatures. The research was published Feb. 9 in the journal Quaternary Science Reviews.