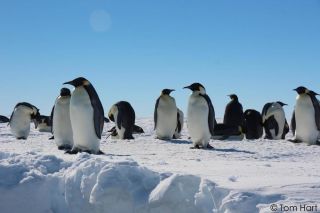 Earth's last ice age was so cold that even Antarctica's emperor penguins had trouble with the chill, a new study finds.

Just three populations of emperor penguins (Aptenodytes forsteri) likely survived the last ice age, which occurred from about 19,500 to 16,000 years ago, with one such population likely setting up a refuge in the Ross Sea, an Antarctic body of water southeast of New Zealand, the researchers said.

Nowadays, emperor penguins breed on sea ice during the Antarctic winters, when temperatures can drop to a chilling minus 22 degrees Fahrenheit (minus 30 degrees Celsius). But during the last ice age, increased sea ice may have made foraging hard, especially with air temperatures that were about 9 degrees Fahrenheit (minus 13 degrees Celsius) colder than they are today, the researchers said. [Images: The Emperor Penguins of Antarctica]

What's more, the total population was about seven times smaller than it is today, and was split into three different populations, they found.

One of the groups was isolated within the Ross Sea, but the other two groups bred with each other from their respective locations along the Antarctic coast, from Adélie Land to the Weddell Sea, or from the Antarctic areas south of Australia to south of Argentina, respectively. Rather than mixing with other penguins, the emperor penguins at Ross Sea largely stayed put, giving them a unique genetic signature even as their population expanded, the researchers said.

"Due to there being about twice as much sea ice during the last ice age, the penguins were unable to breed in more than a few locations around Antarctica," Gemma Clucas, a postdoctoral student in ocean and earth science at the University of Southampton, and one of the lead authors of the paper, said in a statement.

"The distances from the open ocean, where the penguins feed, to the stable sea ice, where they breed, was probably too far," Clucas said. "The three populations that did manage to survive may have done so by breeding near to polynyas — areas of ocean that are kept free of sea ice by wind and currents."

It's likely that a polynya in the Ross Sea helped the emperor penguins survive there, the researchers said.

Climate change continues to affect the Ross Sea today. In fact, changes in wind patterns that are tied to climate change have increased the amount of winter sea ice present over the past several decades. But this pattern is expected to reverse by the end of the century, the researchers said.

"It is interesting that the Ross Sea emerges as a distinct population and a refuge for the species," said study researcher Tom Hart, a zoologist at the University of Oxford in the United Kingdom. "It adds to the argument that the Ross Sea might need special protection."

The study was published March 1 in the journal Global Change Biology.