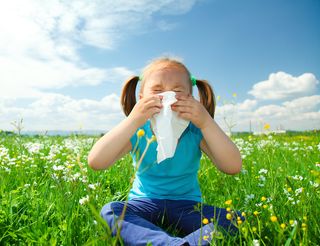 Researchers in Sweden found that children living in families that hand-washed their dishes were about 40 percent less likely to develop allergies compared with kids in homes that used a dishwasher, said study researcher Dr. Bill Hesselmar, an allergist at the University of Gothenburg Department of Pediatrics.

The researchers said they suspect that hand-washing dishes doesn't get them as clean as the dishwasher does, which is actually a good thing because it can help protect against allergies by exposing family members to more bacteria.

Under an idea known as the "hygiene hypothesis," some health researchers think that increased exposure to microbes during early life may stimulate children's immune systems, and that this stimulation may help reduce the risk that a child will develop allergies, the researchers wrote in their study, published online today (Feb. 23) in the journal Pediatrics.

Hand dishwashing is associated with other lifestyle factors that may also cause increased microbial exposure, Hesselmar told Live Science. For example, other studies have suggested that lower income levels, living in more crowded situations and immigration status are all linked with a reduced risk of allergies, and these three factors may also be associated with dishwashing practices. The researchers took these lifestyle factors into account in their analysis.

Although Hesselmar said the new findings were an "interesting observation," he said it is too soon to recommend hand-washing dishes as an allergy-prevention strategy.

In previous studies, living on a farm during early life, having many older siblings, growing up in developing countries and being born by vaginal delivery have all been linked with fewer allergies in children. But in the new study, the researchers wanted to investigate the factors in people's current daily lives that might have an impact on rising rates of childhood allergies. [9 Weirdest Allergies]

They analyzed data from more than 1,000 children living in two regions of Sweden. Parents completed questionnaires asking whether their 7- and 8-year-old children had eczema, asthma or seasonal allergies. Parents also were asked about their typical dishwashing practices, as well as how frequently their child ate fermented foods or farm-fresh foods, which have higher bacterial content than other foods.

Among the kids whose parents hand-washed dishes, allergy rates were even lower among the those who also ate more foods that were fermented or came directly from farms, according to the study.

These results held true even after the researchers took into account parents' allergy histories, whether a child attended day care and whether they were around pets as an infant — three factors that can also influence a child's risk of allergic diseases.

Two physicians at the University of California, San Francisco who wrote a commentary accompanying the study, said the results are interesting but that it's too soon to put them into practical use.

They noted that one of the drawbacks of the findings is that, according to the hygiene hypothesis, early-life exposures to bacteria and germs would have the greatest effect on the immune system to prevent allergic conditions when they occur before 6 months of age. A six-month-old infant would have limited exposure to hand-washed dishes and utensils, especially if breast-fed.

The commentary concluded that more research is needed to understand how different lifestyle choices, such as dishwasher usage and microbial exposure in children, may influence allergic disease and prevention strategies.