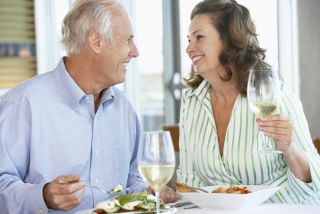 Despite what you may have heard, the only older adults who get health benefits from drinking alcohol are women ages 65 or older, according to a new study of people over age 50. And even for this group, the benefits of drinking are modest, and debatable, researchers said.

In the new study, researchers looked at life span and alcohol consumption. They found that in women ages 65 and older, those who drank moderately lived longer than those who never drank.

For instance, women over age 65 who drank about five alcoholic drinks a week were 27 percent less likely to die during the study compared to women who didn't drink at all. [How 8 Common Medications Interact with Alcohol]

Men ages 50 to 64 who drank also lived longer than those who never drank, the researchers found. However, alcohol was not as protective for this group as it was for women over age 65. Drinking did not help women between ages 50 and 64, or men ages 65 and older live any longer, the researchers said.

Other studies have tied alcohol to health benefits, but that research has predominantly focused on employed, middle-age people, said Craig Knott, the lead researcher of the new study and a doctoral candidate of epidemiology and public health at University College London in the United Kingdom.

The new study looked only at people over age 50, since alcohol can have different effects in this population. As people age, their bodies typically lose the ability to efficiently metabolize alcohol. Moreover, because seniors are more likely than younger adults to take prescription drugs and have health conditions that might not mix well with alcohol, "it was unclear whether the effects of alcohol consumption in working-age populations would necessarily extend to older individuals," Knott told Live Science.

To investigate, the researchers used the Health Survey for England, an annual survey that monitors people's health, and includes questions about average weekly alcohol intake. The researchers looked at surveys from about 53,000 participants, and over the course of the six- to 10-year study, about 8,300 people died.

The researchers divided the participants into groups by sex and age to examine the association between alcohol consumption and death during the study. In addition, the scientists adjusted the results for a variety of factors that may affect people's life spans, including personal, socioeconomic and lifestyle factors.

Another important distinction helped the researchers improve on earlier research. In previous studies, drinkers were typically compared with nondrinkers, but the "nondrinker" group often included former drinkers, a population that often has more health problems than people who never drank at all. In the new study, the researchers compared the drinkers with people who never drank.

"Importantly, former drinkers appear to be less healthy and at greater risk of mortality [death during the study] than never-drinkers," Knott said. It's possible that previous studies have found health benefits among light drinkers because researchers compared them with a group including both former- and never-drinkers, instead of just never-drinkers, he said.

"This is a large and thoughtfully done study," said Dr. Kathryn Rexrode, an associate physician at Brigham and Women's Hospital and an associate professor of medicine at Harvard Medical School in Boston, who was not involved in the new study.

However, despite the study's size, there weren't enough women in the group of people ages 50 to 64 to determine whether alcohol intake was associated with a longer life span, Rexrode noted. What's more, the researchers only looked at alcohol intake at one point in time, and many people died an average of 10 years after the initial survey.

"Thus, alcohol use could have changed in the interim and led to errors in the estimation of the associations," Rexrode said.

Until more research is done on drinking levels in adults and risk of an early death, "individuals should not undertake drinking in order to prolong life," Rexrode said.

In an accompanying editorial, Professor Mike Daube from Curtin University in Australia, who was not involved with the study, commended the researchers for studying alcohol's health effects. Often, alcohol companies trumpet health claims, but "health advice should come from health authorities, not from the alcohol industry," Daube said in the editorial.

"In health as elsewhere, if something looks too good to be true, it should be treated with great caution," he said, adding that health professionals should tell patients that alcohol, even at low levels, may not protect against cardiovascular disease or an early death in the elderly.

The study was published today (Feb. 10) in the journal BMJ.