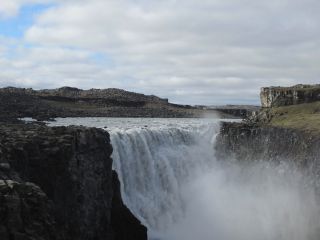 The canyon that holds Europe's most powerful waterfall, Detifoss in Iceland, may have formed in a matter of days, new research suggests.
(Image: © Edwin Baynes)

The canyon that holds Europe's most powerful waterfall may have been formed in a flash by just a few monster floods, new research suggests.

The carving of Jökulsárgljúfur canyon in Iceland, which is home to Detifoss Waterall, may have occurred in three separate megaflood events that lasted just a few days each, but were separated by thousands of years. The findings show that the landscape can dramatically transform in a very short time, said study co-author Edwin Baynes, a geoscientist at the University of Edinburgh in Scotland.

"These very short-term, large-scale events can be quite important in long-term landscape evolution," Baynes told Live Science. [Photos: Wonderful Waterfalls of the World]

But scientists didn't agree on what formed the waterfall and the 17-mile-long (28 km) canyon where it sits. Some have argued that floodwaters gradually carved the canyon, while others have said the meandering of the waterfall over time may have formed the canyon over the years, Baynes said.

To understand how the canyon formed, Baynes and his colleagues looked at chemical signatures in the rock at various locations in the canyon. Cosmic rays bombard the Earth and occasionally hit lithium atoms found in the rocks, producing the helium-3 isotope (or an atom of helium with a different number of neutrons). So rocks exposed to the air longer will contain more helium-3. That, in turn, can reveal when a particular spot in the canyon was first eroded.

If the waterfall and canyon formed gradually, then the rock would gradually show greater amounts of helium-3 farther upstream in the canyon. Instead, scientists found that rock from fairly separated locations throughout the canyon had about the same amount of helium-3 present.

"That suggests they've all been eroded at the same time," Baynes said.

The rock dating suggested that a series of epic volcano-triggered floods sculpted the canyon in three short bursts of several days around 9,000, 5,000 and 2,000 years ago. At those times, volcanoes locked beneath the Vatnajökull Ice Cap, about 90 miles (150 km) upstream from the canyon, erupted, the researchers wrote in the paper.

The eruptions would have ripped the bedrock apart and melted large portions of the glacier, sending torrents of water across the landscape. The floodwaters likely overtopped an already-existing waterfall near the current falls' location, carving the canyon walls by pushing the mouth of the falls upstream, Baynes said. At its peak, torrents of water would have blasted across the landscape at up to 238 million gallons per second (900,000 cubic meters per second), Baynes said.

While the findings show that cataclysmic events can radically transform the landscape, most people shouldn't expect to come home one day to find a massive canyon where their house once stood. This type of dramatic flooding relies on the interaction of a glacier and a volcano, a unique convergence found only in Iceland, Baynes said.

The findings were published yesterday (Feb. 9) in the journal Proceedings of the National Academy of Sciences.