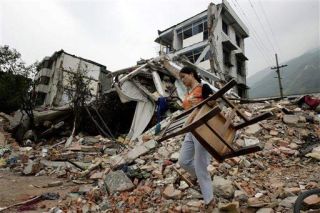 An earthquake survivor carries a chair from the rubble of a building that collapsed in China's May 12 earthquake Saturday May 31, 2008.
(Image: © AP Photo/Eugene Hoshiko.)

During the Sichuan earthquake earlier this month, the ground suddenly shifted a gaping five feet, or about shoulder height of an adult. That huge displacement and the rapid ground motions that followed could explain the extensive and tragic damage in China, an engineer said today. "Even though the findings are preliminary, they can be used. It's better to have this information than no information," said Mario Chavez, professor of seismological engineering at the National Autonomous University of Mexico in Mexico City. His results also showed the ground motions reached velocities of at least 2.1 feet per second (65 cm per second, or about 1.4 mph - that might seem slow, but consider if a heavy object struck at that speed). In size and speed, the motions are similar to those that were recorded at the epicenter of an 8.1-magnitude earthquake that killed 30,000 people in Mexico City in 1985, Chavez said. He added the results provide "an explanation of why we observed so much damage in the region." (Recent reports put the confirmed death toll at 68,858, with another 18,000-plus still missing.) Chavez used a computer model along with ground-motion data collected during the 7.9-magnitude earthquake at Chinese seismological stations to put together a detailed picture of the ground-shaking that ensued on May 12. He discovered that the ground suddenly jumped, shifted or sank by at least five feet (1.5 meters) in a matter of seconds. That kind of ground displacement would have shattered rock and could explain, for instance, the landslide that formed a fragile dam across the Jianhe River and forced the evacuation of approximately 160,000 people, Chavez said. Chavez figured out how much and in which direction the ground moved locally at millions of areas measuring under a half-mile-squared in a vast region that included the earthquake's epicenter. This fine-scale information could help aid workers target the hardest hit of those areas not yet reached by emergency crews, Chavez said. The data may also help officials pinpoint which of the stricken region's hundreds of dams are the most at risk, he added. Chavez presented the preliminary results last week at a meeting of the American Geophysical Union in Fort Lauderdale, Fla.