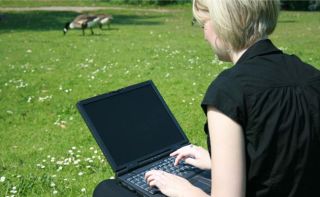 With a new microwave communications technology, called WiMAX, you will be able to get online anyplace you can get cell phone service, including on the road.
(Image: © Steve Woods/stock.xchng)

Move over, WiFi. Roll over, cellular data. Both are going to be obsolete — the future belongs to a new microwave communications technology called WiMAX.

At least, that's the future according to Robert Morrow, a retired Air Force Academy electrical engineering professor writing in the May 23 issue of the journal Science. He sees a day when laptops will be sold with WiMAX interfaces as routinely as they are today sold with WiFi interfaces.

The difference is that you will be able to get online anyplace you can get cell phone service, including on the road. But, unlike the WiFi connection you get while cozying up to your laptop while slurping a hot one at Starbucks, it won't be free — you'll probably get it as a subscription service through a local cell phone carrier.

Morrow explained to LiveScience that WiMAX (which stands for Worldwide Interoperability for Microwave Access, and otherwise known as IEEE 802.16) relies on licensed bandwidth, meaning the government lets telecom carriers (who buy it at auction) use it exclusively, without fear of interference from other devices or services. That means WiMAX devices will be able to use much more power than WiFi devices, which are not licensed. Whereas a WiFi signal has trouble getting down the block, a WiMAX signal should reach several miles — or about the range of a cell phone tower signal.

Not only does WiFi use unlicensed bandwidth, but some of its signals share the same bandwidth used by microwave ovens, Morrow noted, making kitchen use problematic.

The advantage of WiMAX over current digital services offered by many cell phone companies is that WiMAX, if properly used, would amount to a national standard. In other words, you should be able to drive across country and remain online the whole time, Morrow noted. In the United States, you can't do that no matter what digital cellular service you subscribe to, since each company uses its own digital transmission scheme, which may not be compatible with its neighbor, Morrow explained.

As for speed, he indicated that WiMAX can be expected to be somewhat faster than cell phone digital service, but somewhat slower than WiFi. The exact speed of a WiMAX connection will depend on many variables, including local conditions, the user's distance from the base station antenna (which Morrow assumes will be bolted to existing cell phone towers), and how much bandwidth the local carrier has decided to use.

Morrow expects that WiMAX service will be common in major American cities within two to five years, and its success there will determine how quickly the laptop vendors will start adding WiMAX modems to their units.

"In five years it will be sold on all laptops, or on none of them," he predicted.

If WiMAX does take off in the cities, he predicted it would then quickly spread into rural areas, where many people currently get their Internet service using specially adapted WiFi hardware with boosted power levels and line-of-sight antennas.

In the United States, the chief WiMAX pioneer appears to be the XOHM network being built by Sprint in Baltimore and Washington, D.C. The company has announced the commercial service should begin later this year.

Reportedly, the largest WiMAX network so far constructed is in Pakistan, covering 17 cities.