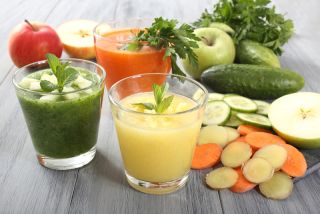 The craze has caught on among celebrities who see doing a cleanse as a way to lose weight quickly and eliminate toxins from their bodies, giving them a fresh start.

But many health professionals aren't fans of taking this approach to a better well-being, saying there's little scientific evidence that these restrictive eating plans actually remove harmful substances from the system or live up to their health-promoting promises.

A juice cleanse is a quick fix that overpromises, said Joy Dubost, a dietitian in Washington, D.C., and a spokesperson for the Academy of Nutrition and Dietetics. If a person wants to follow a more cleansing diet, they should increase the amounts of fruits and vegetables, fiber-rich foods and water in their diet, she said.

Instead of turning to a liquid cleanse, Dubost recommends working with a registered dietitian to build a healthier eating plan that will produce more long-term benefits and weight-loss success.

Fiction: When the body goes without solid foods for 12 or more hours, it switches over into "cleanse mode," and proceeds to excrete toxins and heal itself.

Fact: The body is always in a natural state of cleansing, Dubost said. It has a built-in system for detoxification: the liver, lungs, kidneys and gastrointestinal tract work to remove toxins or harmful substances, she explained.

But "cleanse mode" is not a physiological process, Dubost said, and the body doesn't flip a switch into cleanse mode when a person stops eating solid food. She said it's also unclear exactly what toxins cleanse marketers are talking about because they don't name these toxins. [6 Potential Dangers of Juice Cleanses and Liquid Diets]

Fiction: Another benefit of drinking juice is the lack of fiber. Without fiber, the digestive system is allowed to rest and energy can be freed up for detoxification.

In fact, the limited fiber content of a juice cleanse is one of the drawbacks of doing one, Dubost said. Fiber ensures proper function in the gastrointestinal tract. It promotes regularity and increases satiety, which allows a person to feel full longer. Getting more fiber in the diet may also reduce people's risk of heart disease and cancer, she said.

Fiction: Some people experience headaches, dizziness, fatigue and moodiness during a juice cleanse. This is completely normal and usually a sign that the body is detoxifying.

Fact:Dubost agreed that some people have these symptoms while on a juice cleanse. But it's not a sign that the body is detoxifying, rather, it's a result of a poor diet and a lack of nutrients to sustain a person, she said.

Another potential pitfall of a juice fast or liquid diet is that people doing one may not have the energy to work out, Dubost said. Exercise is an important part of a sustainable approach to shedding pounds.

Fact: Breaking unhealthy habits is a highly individualized process, Dubost suggested. Some people who feel the need to do a dietary cleanse may be answering a psychological need more than a physiological one, she said.

In their minds they feel doing a cleanse will set them up for better success on a healthier diet, Dubost said. They believe cleansing will get them primed and ready, perhaps both mentally and physically, to change their eating habits.

When her clients feel this way, Dubost said she understands what may be going on in their heads, but she tries to limit the amount of time they spend doing a cleanse. "There are much healthier alternatives to losing weight and ensuring the body is working at its best," she said.

Fact: "This is completely false," Dubost said. If anything, a person is going into famine mode and trying to conserve the calories and nutrient stores they have, which slows down metabolism, she explained. There is no science to support this claim, Dubost added.

Fact: If anything, cleansing does the opposite, Dubost said. "I'm not sure where the mental clarity comes from," she said, adding that the brain runs on glucose.

A person can get some glucose from juices or from the maple syrup used in the Master Cleanse detox diet, but not enough for the brain to work at its best, Dubost explained. Also, people might develop headaches and fatigue while doing a cleanse, which can hurt thinking skills, she noted.

Fact: A person might see results on the scale after doing a juice cleanse, Dubost admitted. "But the loss is more water weight and muscle weight, and potentially over time, someone could lose bone mass," she said.

It's also not lasting weight loss: Once a person completes their cleanse and starts eating again, they could gain the pounds right back, Dubost said.