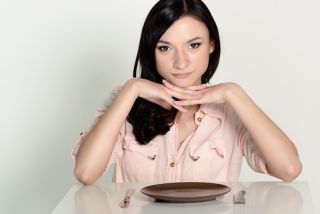 Instead of eating three square meals a day, an eating schedule that involves "intermittent fasting" could help fight not just obesity but many related diseases of modern life, such as diabetes, heart disease, cancer and Alzheimer's, researchers say.

The advice given on fighting obesity usually focuses on consuming fewer calories and exercising more. The benefits of such foods as vegetables, fruits, nuts, fiber and fish, and the value of reducing or eliminating snacks are often also touted.

However, mounting evidence reveals that other key aspects of diet — when and how often people eat — can also play a major role in health. In fact, the most common eating pattern in modern societies of three meals daily, plus snacks, is abnormal from the perspective of human evolution, an international group of researchers wrote in an article published online Nov. 17 in the journal Proceedings of the National Academy of Sciences.

More and more research shows that intermittent fasting could have benefits, they said.

"Fasting alone is more powerful in preventing and reversing some diseases than drugs," said Satchidananda Panda, an associate professor of regulatory biology at the Salk Institute for Biological Studies in San Diego, California, and one of the co-authors of the article. [9 Meal Schedules: When to Eat to Lose Weight]

Ancient hunter-gatherers often ate only intermittently, the researchers noted in their article. This suggests that the ability to function at a high level both physically and mentally during extended periods without food may have been crucial in human evolution, and that the human body may have adapted to perform at its best with intermittent fasting.

Such intermittent fasting could consist of eating 500 calories or less either two days each week, or every other day, or not eating breakfast and lunch several days each week, the researchers said.

Prior research suggests that in animals, intermittent fasting can fend off or even reverse such illnesses as cancer, diabetes, heart disease and neurodegenerative disorders. Animal studies suggest that intermittent fasting provides these benefits by allowing the body to respond better to stress that might otherwise damage it. For example, fasting could starve tumors, reduce inflammation, or improve the removal of damaged molecules and other components of cells, the researchers said.

In addition, the body may respond better to meals eaten at some times of the day rather than others because of the body's circadian rhythms. In the years before artificial light, people depended on natural patterns of day and night, with food primarily eaten during the day and fasting occurring at night. This means that eating at certain times of the day may be healthier for the body's metabolism — for example, in 2013, two studies in humans suggested that eating meals earlier in the day improved weight loss in overweight and obese people.

Panda said that it may be challenging for people to fast intermittently, instead of eating three meals every day. Eating breakfast is often promoted as a weight-control aid, but recent evidence has suggested it might not be, the researchers said.

Future research needs to further explore the benefits and drawbacks of different types of intermittent fasting in a variety of populations. "Its effectiveness in both preventing and reversing diseases, as well as interaction with standard medications for chronic metabolic diseases, should be tested in appropriate volunteer groups," Panda said.