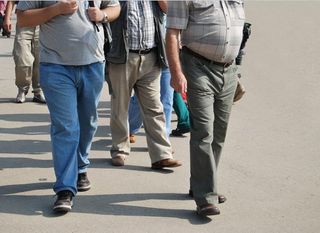 Daily exercise reduces the effect that the so-called "obesity gene" has on a person's chances of becoming severely overweight, according to a new study.

The odds of becoming obese dropped 27 percent for adults with one version of the FTO gene (or "fat mass- and obesity-associated" gene) if they were physically active, the study showed.

The reduced risk appeared to be the same across genders and races among carriers of that version of the gene, but the researchers found that the effect was more pronounced in North Americans than in Europeans.

Despite the continental differences, the study "tells us that even people who are predisposed to obesity are sensitive to physical activity," said Ruth Loos, an epidemiologist at the Institute of Metabolic Science of the University of Cambridge, who was lead author of the study. "This goes against the public view, 'It's in my genes, I can't do anything about it.'"

About one-third of all U.S adults are obese, according to the Centers for Disease Control and Prevention.

In 2007 scientists linked one version, or variant, of the FTO gene to an increased obesity risk, Loos said.

Over the past few years, researchers have investigated whether physical activity reduces the influence of that FTO variant on a person's risk of obesity. The results were inconsistent. But some of these studies were too small, said Evadnie Rampersaud, a genetic epidemiologist at the University of Miami, who was not involved in the new research.

For the new study, researchers reanalyzed data from 45 previous studies involving more than 200,000 adults to measure the interaction between the FTO gene, physical activity and body mass index, Loos said.

About three-fourths of the study participants were physically active — that is, they did at least 30 minutes of exercise, such as walking the dog or pulling weeds, five days a week.

The heightened effect of exercise seen in people from North America, compared with those from Europe, could be due to a number of factors, Loos said, including the greater likelihood of Europeans in general to exercise, or the American studies' better gauge of physical activity.

The importance of exercise

With the study's large number of participants makes it a definitive finding, Rampersaud said, the way the researchers defined physical activity could be debated. Using devices such as accelerometers to measure physical activity would be more accurate than relying on questionnaires, she said.

Loos says that future research will need to look into whether the effects seen in the study are from more than just exercise. "Maybe physical activity is just a proxy for a better lifestyle," she said.

But in any case, Loos said that having a variant of the FTO gene doesn't guarantee obesity. A separate study recently showed that some people who are told that they have a high genetic risk for obesity "sort of let go" by exercising less and eating poorly, she said.

"But even if you have this genetic risk for obesity, you can do something about it," Loos said.

The study was published today (Nov. 1) in the journal PLoS Medicine.

Pass it on: Even if you carry the obesity gene, daily exercise can still help you keep your weight down.