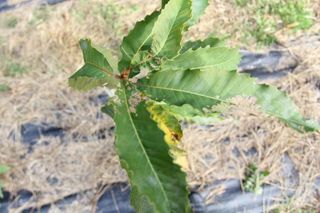 The iconic American chestnut tree was practically wiped out from the eastern United States 100 years ago by a deadly fungus, but now, thanks to a tweaked gene, researchers are growing trees that appear to be resistant to the fungus.

The researchers hope to produce thousands of the genetically modified chestnut trees to restore the plant to North America.

The American chestnut tree was once widespread in the eastern United States, accounting for about a quarter of the trees in that area's forests. But around the turn of the 20th century, a fungus known as the chestnut blight killed nearly all the chestnut trees in the region.

A few years ago, researchers developed and planted a genetically modified version of the American chestnut tree, which contained a single gene from wheat that the researchers suspected would protect the trees from the blight.

Now, those trees are growing, and the researchers have conducted a number of tests that show the plants are indeed resistant to blight.

And in a study published this week in the journal Plant Science, the researchers reported that American chestnuts with the resistance gene can pass it on to the next generation. [6 Trees That Are Easier to Identify in Fall]

Studies show that the nuts produced by genetically modified trees are not noticeably different from the nuts produced by wild tress, and they should be safe for consumption, Tschaplinski said. In addition, the genetic alteration does not affect the feeding habits of insects or the growth of normal fungi (other than the blight fungus).

"We're doing all these tests to be sure there are no ill effects, because we are the first to develop a transgenic tree for an environmental restoration program," said William Powell, a professor at ESF who leads the research on the American chestnut.

Before the trees will be available for public planting, several government agencies, including the Food and Drug Administration, need to approve the genetically modified plants.

The researchers said they will produce as many as 10,000 young trees so they will be ready for planting if and when the approval process is complete.