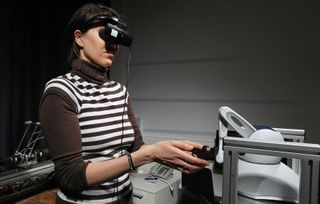 A participant works with the two-part robot that creates the ghost illusion.
(Image: © Alain Herzog/EPFL)

Sometimes, people report having felt a strange, unseen presence around them — and they may attribute it to a ghost. Now, in a new study, scientists describe how the "ghost" is an illusion made by the brain.

In experiments, the researchers were able to trick the participants' brains into creating the eerie sensation.

"The sensation that somebody is nearby when no one is actually present is called 'the feeling of a presence,'" the researchers said. "Although people do not see the 'presence,' they may describe its spatial location and frequently turn around or offer food to the invisible presence."

Apart from being a prominent feature across all cultures, the phenomenon has been described by people with psychiatric and neurological problems, and even in healthy people experiencing physical exhaustion, such as in people doing extreme mountaineering, the researchers said.

In the new study, the researchers created a robot to trigger the ghost illusion in a few dozen healthy people by causing a mismatch in their senses. [Top 10 Mysteries of the Mind]

"In our first experiment, 30 percent of the healthy participants spontaneously reported the feeling of having somebody behind them, touching them," said Dr. Olaf Blanke, a neurologist at the École Polytechnique Fédérale de Lausanne (EPFL) in Switzerland.

But things got even stranger when the researchers introduced a small delay between participants' actions and the robot's response.

The delay between participants' reaching out forward and the sensory signals they received on their backs from the robot touching them caused confusion over the source of their sensation. The brain faced an impossible situation in which the sensory and motor signals didn't match.

The result was an illusory experience, in which the participants perceived the touch as being caused by an invisible presence behind them that was touching their backs. [See video of the experiments]

"For some, the feeling was even so strong that they asked to stop the experiment," said Giulio Rognini, a neuroscientist at EPFL who led the study, published today (Nov. 6) in the journal Current Biology.

The findings reveal the fine balance between the brain mechanisms that generate the experience of "self" versus "other," and how distorting such mechanisms could lead to strange experiences, the researchers said.

The ghost in the brain

The robot experiment in healthy people is similar to the sensations of some patients with mental disorders, or of healthy individuals under extreme circumstances, Blanke said. "This confirms that [the feeling that a ghost is nearby] is caused by an altered perception of their own bodies in the brain."

To explore the brain basis of this illusion, the researchers looked at the brain lesions of 12 patients who had epilepsy or had suffered a stroke. All of the patients had reported experiences in which they felt a person or a shadow was present, right behind them, or in the corner of their eye. [Senses and Non-Sense: 7 Odd Hallucinations]

The researchers linked the illusory ghost perception to lesions in three brain regions: the temporoparietal cortex, the insular cortex and the frontoparietal cortex.

The findings could also help researchers understand the roots of symptoms of schizophrenia, the researchers said. These patients' hallucinatory symptoms, such as hearing alien voices and delusions that they are being controlled, could be triggered by an incorrect of integration of senses in the brain, as previous studies have also noted.