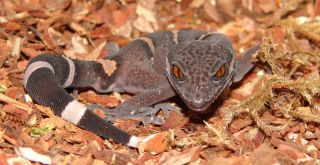 Scaled reptiles, such as this Chinese gecko, have longer lives if they skip sex when they're young.
(Image: © Daniel Pincheira-Donoso)

Reptiles that have sex early and frequently in life and feast on meat, tend to "live fast, die young," as the rock-and-roll saying goes, according to a new study.

A team of researchers examined longevity in scaled reptiles (Lepidosaurs) by looking at 1,014 species, including 672 lizards, 336 snakes, five worm lizards and a lizardlike creature called a tuatara. The reptiles were more likely to die at young ages if they reached sexual maturation earlier and laid eggs or gave birth more times than their counterparts did, the study found.

"We observed that more sex (or at least more pregnancies) means shorter life," researcher Daniel Pincheira-Donoso, an evolutionary biologist at the University of Lincoln, in the United Kingdom, said in a statement. "The study revealed that reptiles [that] sexually mature at a younger age will likely have shorter lives, while those who prefer to delay sexual maturity will probably live longer." [Album: Bizarre Frogs, Lizards and Salamanders]

"Vegetal food is an intrinsically low-nutrition food, so we think that those who have these diets experience a reduction in reproductive rates, which in turn increases their lifespan," Pincheira-Donoso said.

The results suggest that vegetarian male and female reptiles that wait until they are older to have offspring and reproduce more slowly tend to live longer lives than their counterparts, the researchers said. They added that the findings support key predictions about longevity and life-history theory, the study of how natural selection influences life events, such as juvenile development and age of sexual maturity, to help animals successfully reproduce.  For example, animals that don't reproduce too early in life tend to live longer, research shows.

In contrast, reptiles that had frequent and large-sized clutches tended to have short lives. But species with large eggs, compared to their size, tended to have long lives, likely because reptiles lay fewer eggs if the eggs are large than if they are small, Pincheira-Donoso said.

The team also found that reptiles that ate meat tended to grow faster and have sex earlier and more frequently, which may explain why carnivores, such as snakes, tend to have shorter lives. Herbivorous animals probably ate less protein- and nutrient-rich food, leading them to reach maturity later in life and live longer, the researchers said. It's also possible that hunting for meat is more risky than finding fruits and vegetables, which could affect lifespan.

Other studies can test these ideas by feeding a group of species different diets and examining how the food affects growth time and maturity in each animal, the researchers said.

The study was published Oct. 22 in the journal Global Ecology and Biogeography.