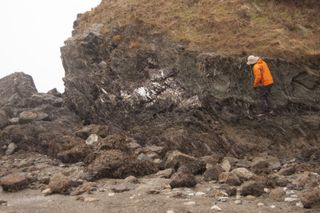 Telltale signs of life have been discovered in rocks that were once 12 miles (20 kilometers) below Earth's surface — some of the deepest chemical evidence for life ever found.

Researchers found carbon isotopes in rocks on Washington state's South Lopez Island that suggest the minerals grew from fluids flush with microbial methane. Methane from living creatures has distinct levels of carbon isotopes that distinguish it from methane gas that arises from rocks. (Isotopes are atoms of the same element with different numbers of neutrons in their nuclei.)

In a calcium carbonate mineral called aragonite, the standard mix of carbon isotopes was radically shifted toward lighter carbon isotopes (by about 50 per mil, or parts per thousand). This ratio is characteristic of methane gas made by microorganisms, said Philippa Stoddard, an undergraduate student at Yale University who presented the research Tuesday (Oct. 21) at the Geological Society of America's annual meeting in Vancouver, British Columbia. "These really light signals are only observed when you have biological processes," she told Live Science. [Extreme Life on Earth: 8 Bizarre Creatures]

The pale aragonite veins cut through basalt rocks that sat offshore North America millions of years ago. The veins formed after the basalt was sucked into an ancient subduction zone, one that predated today's Cascadia subduction zone. Two tectonic plates smash together at subduction zones, and one plate descends under the other, creating deep trenches.

Methane gas supplied the carbon as aragonite crystallized in cracks in the basalt, and replaced pre-existing limestone. The researchers think that microbes produced the methane gas as a waste product.

"We reason that you could have life deeper in subduction zones, because you have a lot of water embedded in those rocks, and the rocks stay cold longer as the [plate] comes down," Stoddard said.

But the South Lopez Island aragonite suggests the minerals formed under extreme conditions that push the limits of life on Earth. For example, temperatures reached more than 250 degrees Fahrenheit (122 degrees Celsius), above the stability limit for DNA, Stoddard said. However, the researchers think the higher pressures at these depths may have counterbalanced the effects of the heat. The rocks are now visible thanks to faulting, which pushed them back up to the surface.

Stoddard and her collaborators plan to sample more of the aragonite and other rocks nearby, to gain a better understanding of where the fluids came from and pin down the temperatures at which the rocks formed.

Methane seeps teeming with million of microbes are found on the seafloor offshore Washington and Oregon along the Cascadia subduction zone. And multicellular life has been documented in the Mariana Trench, the deepest spot on Earth, and in South African mines 0.8 miles (1.3 km) deep. Researchers also have discovered microbes feasting on rocks within the oceanic crust itself.