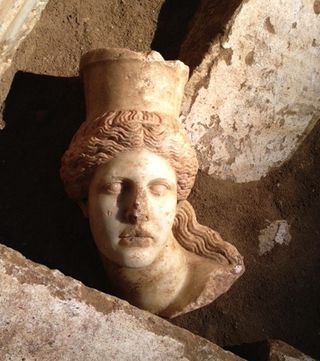 Besides its broken nose, the sphinx head is rather intact.
(Image: © Greek Ministry of Culture)

Archaeologists have discovered the missing head of one of the two marble sphinxes guarding a huge Macedonian tomb under excavation in Amphipolis, Greece.

The statue's head has wavy hair that falls to its left shoulder, and it bears traces of red paint, according to an update yesterday (Oct. 21) from the Greek Ministry of Culture. Excavators also found fragments of the broken wings from the pair of sphinxes that stand at the entrance of the tomb.

Enclosed by a marble wall 1,600 feet (490 m) in perimeter, the monumental burial mound at Amphipolis in northern Greece could be the largest of its kind in the Greek world. The archaeologists leading the ongoing excavation have not yet determined who is buried in the tomb (or if it is even intact), but they have said they believe the complex dates back to the fourth century B.C., during the era of Alexander the Great. [See Photos of the Mysterious Ancient Tomb in Amphipolis]

The excavators don't expect to find Alexander the Great's long-lost grave inside the tomb, as historical records indicate the Macedonian empire-builder died in Babylon and was buried in Alexandria. But dig leader Katerina Peristeri told reporters last week that whoever was buried there must have been "extremely important."

The dig attracted widespread attention after the headless sphinxes at the entrance to the tomb were revealed in August. As the archaeologists have probed deeper into the tomb's soil-filled inner chambers, they've made some remarkable discoveries. Last week they uncovered an elaborate floor mosaic made from colorful pebbles arranged to show the Greek goddess Persephone being whisked away to the underworld by Hades in a chariot drawn by a pair of white horses. The messenger god Hermes is also present in the figurative scene wearing his signature broad-brimmed hat.

The newly revealed sphinx head was missing part of its nose, but was otherwise quite intact. It was found beyond the floor mosaic, in the fourth chamber of the tomb, according to the Greek Ministry of Culture. In Greek art, sphinxes typically have the body of a lion, the wings of a bird and the head of a woman. In the face, the sphinx somewhat resembles the larger-than-life, intricately carved caryatids discovered in the Amphipolis tomb a few weeks ago. The caryatids — female statues that take the place of columns or pillars — flank the doorway of the second entrance to the tomb.