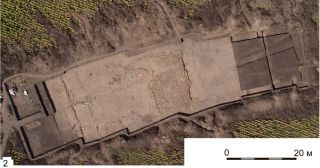 A temple dating back about 6,000 years has been discovered within a massive prehistoric settlement in Ukraine.
(Image: © courtesy Nataliya Burdo and Mykhailo Videiko/Institute of Archaeology NAS of Ukraine, Kyiv.)

A 6,000-year-old temple holding humanlike figurines and sacrificed animal remains has been discovered within a massive prehistoric settlement in Ukraine.

Built before writing was invented, the temple is about 60 by 20 meters (197 by 66 feet) in size. It was a "two-story building made of wood and clay surrounded by a galleried courtyard," the upper floor divided into five rooms, write archaeologists Nataliya Burdo and Mykhailo Videiko in a copy of a presentation they gave recently at the European Association of Archaeologists' annual meeting in Istanbul, Turkey.

Inside the temple, archaeologists found the remains of eight clay platforms, which may have been used as altars, the finds suggested. A platform on the upper floor contains "numerous burnt bones of lamb, associated with sacrifice," write Burdo and Videiko, of the Institute of Archaeology of the National Academy of Sciences of Ukraine. The floors and walls of all five rooms on the upper floor were "decorated by red paint, which created [a] ceremonial atmosphere." [See Photos of the Prehistoric Temple & Animal Remains]

The ground floor contains seven additional platforms and a courtyard riddled with animal bones and pottery fragments, the researchers found.

A number of other prehistoric sites, of similar size, have been found in Ukraine and other parts of Eastern Europe. These sites are sometimes referred to as belonging to the "Trypillian" culture, a modern-day name. The name is derived from the village of Trypillia in Ukraine, where artifacts of this ancient culture were first discovered.

Archaeologists found that when this prehistoric settlement was abandoned, its structures, including the newly discovered temple, were burnt down, something that commonly occurred at other Trypillian culture sites.

Fragments of figurines, some of which look similar to humans, were also found at the temple. Like findings at other Trypillian sites, some of the figurines have noses that look like beaks and eyes that are dissimilar, one being slightly larger than the other.

Ornaments made of bone and gold were also discovered at the temple. The gold ornaments are less than an inch in size and may have been worn on the hair, researchers say.

At the time the prehistoric settlement near Nebelivkaflourished other early urban centers were being developed in the Middle East. And the newly discovered prehistoric temple is similar, in some ways, to temples from the fifth to fourth millennia B.C. that were built in ancient Middle East cities, such as those in Anatolia and Mesopotamia, Burdo and Videiko note.

For example a 6,000-year-old temple at the ancient city of Eridu, in modern-day Iraq, also had a floor partitioned into smaller rooms, they note.

The discovery was recently published, in Ukrainian, in the journal Tyragetia. Another paper reporting on recent research at the settlement was published recently online in the journal Antiquity.