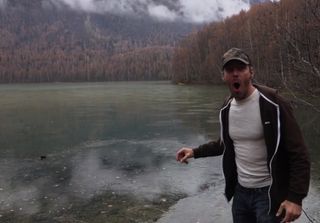 A self-proclaimed "professional YouTuber" has scored a viral video hit with his discovery of the sci-fi sounds produced by skipping rocks across a frozen lake.

The winter phenomenon is old hat to kids from cold weather states, but for Cory Williams, the eerie pings and pews were jaw-droppingly bizarre.

"This is the coolest sound I've ever heard," Williams tells his girlfriend, who is filming the scene. An apparent "cheechako" (Alaska newcomer), Williams moved to Anchorage in August and is documenting his culture shock in a YouTube video log.

While Alaska's winter may hold a wealth of amazing new experiences for Williams, for acoustics expert Mark Hamilton, the sounds illustrate a classic acoustics problem. [Listen to 6 Mysterious Sounds of the Deep Sea (Video)]

"I'm from Massachusetts originally, and I've heard this phenomenon often," said Hamilton, a professor of acoustics at the University of Texas, Austin. "I use this example every year when I teach our introductory acoustics course."

Stand too close to a stone tossed on ice, and all you'll hear is a simple crack, Hamilton told Live Science. But if you hurl the stone far away and listen at a distance, the higher tones arrive first, and you hear a downward chirp. "It's as though you ran your finger from right to left across piano keys," he said.

That's because the lake ice acts like a vibrating plate. When the stone hits, the impact launches a bending wave (also called a flexural wave) in the ice. The bending wave travels at supersonic speed and continuously radiates sound into the air while it zips outward (away from the impact), Hamilton said. (The wave pattern resembles that produced by a pebble dropped in a pond.)

Because short waves travel faster than long waves, the higher pitches, or frequencies, hit your ear first. Stand too close and you won't hear this split. "It takes distance for the higher frequencies to outrun the lower frequencies," Hamilton said.

The same dispersion effect works in metal too. Lake-sized metal plates are pretty rare, but long wires, such as Slinkies, work equally well. The physics also helps explain the remarkable similarity between the lake ice chirps and sci-fi movie sound effects. For instance, the laser blasts in the first "Star Wars" movies were from dispersion, produced by hitting an antenna tower guy wire with a hammer, according to 1980s TV documentaries by Lucasfilm.