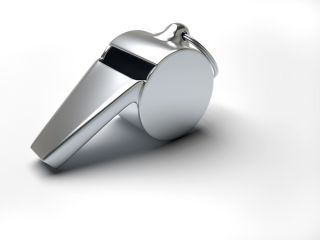 Neil Getnick is managing partner of the law firm Getnick & Getnick L.L.P. in New York and has handled many whistleblower cases in the pharmaceutical and healthcare sectors. He contributed this article to Live Science's Expert Voices: Op-Ed & Insights.

Whistleblower laws have been emerging as a prominent part of the healthcare landscape in the United States — and September 2014 provided a good vantage point to see where this trend is heading.

Healthcare and pharmaceutical companies are watching closely, because whistleblower cases have proven an essential tool for unearthing industry fraud. Consumers have benefited as whistleblowers have revealed such practices as overcharging for medical devices and the mislabeling of prescription medication — and recent events show that the power of the whistleblower is on the rise.

Encouraging whistleblowers to speak up

U.S. Attorney General Eric Holder captured headlines when — the week before announcing his resignation — he called for the increase of award percentages in financial fraud cases under the Financial Institutions Reform, Recovery, and Enforcement Act to encourage whistleblowers to come forward. The move is indicative of a more general rise in support for whistleblower laws in the government, one that will impact multiple industries.

A week after the Attorney General's declaration, Acting Associate Attorney General Stuart Delery delivered a speech in Washington, D.C. that received less publicity, but had enormous significance to the healthcare community. He reaffirmed that "the Department [of Justice] is committed to the preservation of a strong, and effective, False Claims Act."

The False Claims Act (FCA) is a federal law, which is now mirrored by many recently enacted state laws, that empowers whistleblowers, their attorneys and the government to form public-private partnerships aimed at combating fraud against the government. It is particularly relevant to the health care and pharmaceutical industries because fraud in these areas often impacts the government's Medicaid and Medicare expenses — sometimes costing taxpayers billions of dollars.

Delery went as far as anyone has to date in emphasizing the importance of the collaborative relationship between the government, whistleblowers and their lawyers, saying, "The unique public-private partnership that is established by the [FCA] safeguards billions of dollars of taxpayer funds, protects the health and safety of consumers, and improves public confidence in government."

Delery emphasized that the Department of Justice (DOJ) now looks to build off whistleblower cases to achieve systemic change to combat fraud, explaining that there is now "a renewed emphasis on ensuring that settlements include clear, public statements about the misconduct giving rise to [FCA] violations." Delery also referenced related government tools for responding to and deterring future fraud, including criminal prosecutions, independent corporate monitors, and the establishment of a U.S. Office of Data Reliability to ensure pharmaceutical company compliance with FDA manufacturing standards. [Men Commit More Scientific Fraud Than Women ]

The same week, U.S. Internal Revenue Service (IRS) Commissioner John Koskinen announced his support for whistleblowers and the IRS whistleblower program, advising that the IRS will be increasing the number of personnel in the IRS Whistleblower Office by more than 70 percent. Leaving no doubt about the rationale for this expansion, Commissioner Koskinen explained, "Additional staff will help us continue implementing the [IRS whistleblower] law and working to increase the pace of award payouts . . .[T]he IRS needs to do everything possible to strengthen the whistleblower program and build on the progress already made in implementing the law. I am committed to expanding the program's reach . . ."

The week following, the U.S. Securities and Exchange Commission (SEC) announced the largest SEC whistleblower award yet, more than $30 million that went to a foreign national who filed a claim under the SEC whistleblower law. The case involved accusations against a company for cheating investors out of millions of dollars. The SEC did not reveal details or the name of the company but stated that the whistleblower uncovered a "difficult to detect" fraud.

Does all this have relevance to the healthcare industry? Just ask GlaxoSmithKline, which separately that same week paid a $484 million fine in China arising from kickback payments to doctors which violated anti-bribery laws.

The SEC award is a development of worldwide significance for the healthcare industry because the SEC whistleblower law can take on Foreign Corrupt Practice Act cases for anti-kickback and bribery. This is vital to U.S. consumers who are increasingly on the receiving end of the risks posed by pharmaceuticals and healthcare products produced in under-regulated countries such as China and India.

September a milestone for healthcare whistleblowers

In September, Shire Pharmaceuticals L.L.C. agreed to pay $58.9 million to resolve an FCA case alleging the company promoted and overstated the efficacy of one of its drugs, despite a lack of supporting clinical data.

Various other FCA cases that month involving medical device, hospice, skilled nursing facility, surgical center and medical-center companies resulted in agreed-upon settlements totaling another $13 million. Such activity is not surprising in an era when annual FCA civil recoveries now average more than $3.7 billion. And that doesn't take into account criminal fines, which are also substantial, and the attendant costs of monitoring and other such programs often included in the overall context of a civil settlement.

The lesson of September 2014 for the healthcare industry in this area is that whistleblower laws and cases are not only here to stay, but their impact is about to get even greater.

What can companies do in the face of this reality?

Here are two out-of-the-box ideas: First, embrace business driven integrity (recognizing that integrity is key to the company's mission, acting as a profit center and a competitive advantage), rather than simply tolerating law-driven compliance; and second, recognize and use whistleblower laws as the friend of business helping honest companies to compete more effectively in both the domestic and global marketplaces.

Companies should promote their integrity-based actions as a way of gaining both the trust and business of consumers. That translates to higher profits, reinforcing that good conduct is good business.