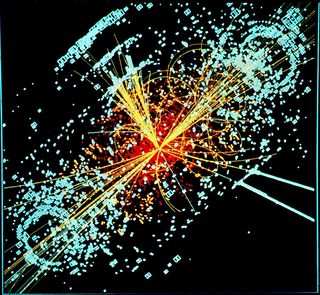 Stephen Hawking bet Gordon Kane $100 that physicists would not discover the Higgs boson. After losing that bet when physicists detected the particle in 2012, Hawking lamented the discovery, saying it made physics less interesting. Now, in the preface to a new collection of essays and lectures called "Starmus," the famous theoretical physicist is warning that the particle could one day be responsible for the destruction of the known universe.

Hawking is not the only scientist who thinks so. The theory of a Higgs boson doomsday, where a quantum fluctuation creates a vacuum "bubble" that expands through space and wipes out the universe, has existed for a while. However, scientists don't think it could happen anytime soon.

"Most likely it will take 10 to the 100 years [a 1 followed by 100 zeroes] for this to happen, so probably you shouldn't sell your house and you should continue to pay your taxes," Joseph Lykken, a theoretical physicist at the Fermi National Accelerator Laboratory in Batavia, Illinois, said during his lecture at the SETI Institute on Sept. 2. "On the other hand it may already happened, and the bubble might be on its way here now. And you won't know because it's going at the speed of light so there's not going to be any warning." [Doomsday: 9 Real Ways Earth Could End]

The Higgs boson, sometimes referred to as the 'god particle,' much to the chagrin of scientists who prefer the official name, is a tiny particle that researchers long suspected existed. Its discovery lends strong support to the Standard Model of particle physics, or the known rules of particle physics that scientists believe govern the basic building blocks of matter. The Higgs boson particle is so important to the Standard Model because it signals the existence of the Higgs field, an invisible energy field present throughout the universe that imbues other particles with mass. Since its discovery two years ago, the particle has been making waves in the physics community.

Now that scientists measured the particle's mass last year, they can make many other calculations, including one that seems to spell out the end of the universe.

The Higgs boson is about 126 billion electron volts, or about the 126 times the mass of a proton. This turns out to be the precise mass needed to keep the universe on the brink of instability, but physicists say the delicate state will eventually collapse and the universe will become unstable. That conclusion involves the Higgs field.

The Higgs field emerged at the birth of the universe and has acted as its own source of energy since then, Lykken said. Physicists believe the Higgs field may be slowly changing as it tries to find an optimal balance of field strength and energy required to maintain that strength. [5 Implications of Finding a Higgs Boson Particle]

"Just like matter can exist as liquid or solid, so the Higgs field, the substance that fills all space-time, could exist in two states," Gian Giudice, a theoretical physicist at the CERN lab, where the Higgs boson was discovered, explained during a TED talk in October 2013.

Right now the Higgs field is in a minimum potential energy state — like a valley in a field of hills and valleys. The huge amount of energy required to change into another state is like chugging up a hill. If the Higgs field makes it over that energy hill, some physicists think the destruction of the universe is waiting on the other side.

But an unlucky quantum fluctuation, or a change in energy, could trigger a process called "quantum tunneling." Instead of having to climb the energy hill, quantum tunneling would make it possible for the Higgs field to "tunnel" through the hill into the next, even lower-energy valley. This quantum fluctuation will happen somewhere out in the empty vacuum of space between galaxies, and will create a "bubble," Lykken said.

Here's how Hawking describes this Higgs doomsday scenario in the new book: "The Higgs potential has the worrisome feature that it might become metastable at energies above 100 [billion] gigaelectronvolts (GeV). … This could mean that the universe could undergo catastrophic vacuum decay, with a bubble of the true vacuum expanding at the speed of light. This could happen at any time and we wouldn't see it coming." [10 Implications of Faster-Than-Light Travel]

The Higgs field inside that bubble will be stronger and have a lower energy level than its surroundings. Even if the Higgs field inside the bubble were slightly stronger than it is now, it could shrink atoms, disintegrate atomic nuclei, and make it so that hydrogen would be the only element that could exist in the universe, Giudice explained in his TED talk.

But using a calculation that involves the currently known mass of the Higgs boson, researchers predict this bubble would contain an ultra-strong Higgs field that would expand at the speed of light through space-time. The expansion would be unstoppable and would wipe out everything in the existing universe, Lykken said.

Not all doom and gloom

Either all of space-time exists on this razor's edge between a stable and unstable universe, or the calculation is wrong, Lykken said.

If the calculation is wrong, it must come from a fundamental part of physics that scientists have not discovered yet. Lykken said one possibility is the existence of invisible dark matter that physicists believe makes up about 27 percent of the universe. Discovering how dark matter interacts with the rest of the universe could reveal properties and rules physicists don't know about yet.

"This is very much the beginning of the story and I've shown you some directions that story could go in, but I think there could be surprises that no one has even thought of," Lykken concludes in his lecture.