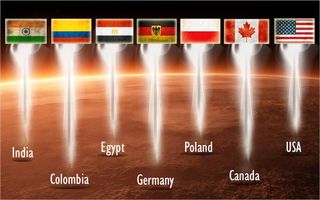 Robots built by students from around the world will face off in a competition designed to test how well these wheeled explorers might one day get around on the surface of Mars.

Similar to the U.S. University Rover Challenge, held annually in the Utah desert, the European Rover Challenge involves creating a prototype Mars rover that must attempt to complete several tasks, such as navigation and sample return, in a simulated Martian environment.

The competition, organized by the NGO Mars Society Polska, will be held this weekend (Sept. 5-7) in Poland's Swietokrzyskie Region. A three-day "Humans in Space" conference is scheduled to take place at the same time. [7 Most Mars-Like Places on Earth]

The goal of the rover competition is to give students experience in developing technologies for manned missions to Mars, while also fueling interest among the general public in space exploration, the organizers said.

"Right now, the rovers [currently] at the Red Planet are autonomous robots seeking [signs of] life and water," in other words, nonhuman exploration, said Lukasz Wilczynski, organizer of the European Rover Challenge. "The first humans [on Mars], or 'Martianauts,' will need different kinds of robots."

There are 24 teams registered for the rover challenge, including participants from Australia, Bangladesh, Canada, Colombia, Egypt, India, Poland, the United Kingdom and the United States.The teams include university undergraduates, masters students, recent graduates and doctoral students, although contest rules state that Ph.D. students can make up no more than half of the team.

Each rover must attempt to complete five tasks, four of which will take place in a simulated Martian environment. The first task involves gathering samples of rock, surface soil and deeper soil, and transporting them back to the rover base — much like the goal of current and future NASA Mars rover missions. The second task involves navigating the rover to three locations given by sets of coordinates, without the use of a camera. The third task involves "repairing" a broken mock reactor system. The fourth task involves obtaining a spare part from storage and transporting it to a repair site. And for the fifth task, teams will present their rover to a panel of judges.

The teams were also required to provide documentation of how the rovers were built, and assign management positions within the team. "It's not only an engineering contest, it's also a management contest," Wilczynski said.

The related conference on humans in space will feature keynote talks by aerospace experts including Robert Zubrin, founder and president of the nonprofit Mars Society, headquartered in Lakewood, Colorado, and G. Scott Hubbard, a professor of aeronautics and astronautics at Stanford University and a former director of NASA's Ames Research Center in Moffett Field, California.

The event will also feature talks by experts on medicine in space, law in space, education in space and art in space, Wilczynski said.

In addition to the rover challenge and the conference, there will be a science and technology picnic intended for kids, since children make up the next generation of explorers, Wilczynski said.

The festivities will begin at 11 a.m. local time tomorrow (Sept. 5), and the winners of the rover challenge will be announced Sunday (Sept. 7) at 4 p.m. local time.