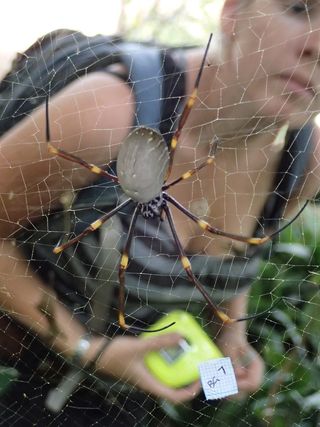 Researchers like Lizzy Lowe study spiders with little to no fear of being bitten.
(Image: © Lizzy Lowe)

Find yourself thinking that the spider living in your garden is the biggest you’ve ever seen? You could be right.

New research shows some spiders are getting larger and even doing better in cities than in their natural habitats.

In a study published today in PLOS ONE, we show that city living is leading to bigger spiders that have the potential to produce more young. We studied golden orb weaving spiders (Nephila plumipes) which are found along the east coast of Australia. Compared to their relatives in the bush, we found that city-dwelling orb weavers were bigger and had larger ovaries.

But bigger spiders aren’t the only effect cities have on wildlife. Growing amounts of research suggest native animals are evolving to live in our cities, alongside people. That’s good news too — spiders help stop insect populations getting out of control, and are also a sign that nature in cities is more resilient than we might think.

We collected these spiders from parks, gardens and bushland patches and investigated differences in the spiders' body sizes, fat reserves and ovary weights. The study found that when spiders lived in urban areas they increased in size and had larger ovaries, indicating increased reproductive capacity.

There were strong associations in particular between spider size and the presence of hard surfaces (such as roads and buildings) and lack of vegetation. These hard surfaces contribute to the urban “heat island” effect, which makes it warmer in cities than surrounding areas.

It is also likely that there is more food for the spiders in the city as a result of night lighting and increased resources. This combination of warm temperatures and more food would allow spiders to put more energy towards growth and reproduction. Fewer predators and parasites in urban areas could also allow urban spiders to grow larger.

But don’t start reaching for the bug spray just yet. Although you may not like the idea of living in close proximity to spiders, we need them in cities because they are vital components of terrestrial ecosystems. The incredible diversity of spiders in Australia means that they play many important roles and contribute to biodiversity — the total number of different species found in an environment.

Many plant-eating insects may become pests if spiders aren’t around to eat them. Spiders are also an important food source for many birds.

It’s good news that some spiders are able to survive in cities, but not all species are so lucky. Cities are not typically hospitable places for wildlife. Humans have modified the natural world so extensively that most animals can’t survive in urban landscapes and become extinct in human-inhabited areas.

But some species are urban exploiters, such as pigeons and crows, which thrive in urban areas and are adapting to take advantage of novel environments. This leads to an increase in the numbers of some species but an overall decrease in biodiversity.

There is increasing evidence that city living is driving physical and biological changes in urban wildlife.

For example, due to noise pollution, crickets and birds in the city have both been shown to change their calls in order to be heard. Other studies show some birds have altered the time of year they reproduce and in extreme cases have completely stopped migrating.

It is difficult to determine whether these changes are due to individual flexible responses or if urban populations are undergoing evolutionary change.

But one study found that birds from urban areas have evolved in response to the intense selection pressures cities place on organisms trying to live there. The urban birds were bolder as a result of increased exposure to human activities.

As invertebrates have relatively short generation times and urbanisation can be a strong selective pressure, it is likely that cities are driving the evolution of many urban invertebrate species.

The implication of these studies is that human activities are not just affecting which species can live in cities but may be causing the animals to undergo rapid evolutionary change.

Urban wildlife: not just nice to look at

Understanding the effects of urbanisation on wildlife is essential for the maintenance of biodiversity in cities. Having native plants and animals in our cities is not just important for conservation, it’s also essential for human health and education.

People are happier and healthier when surrounded by green space, and we can’t expect future generations to care about conservation if the only animals they have ever seen are rats and pigeons.

So the fact that some spiders are loving cities is cause for hope. In fact, in order to maintain biodiversity in cities we need to be able to support more diverse populations of spiders and other invertebrates.

By gaining a better understanding of the impacts of urbanisation on wildlife in cities we can work towards creating healthy, functioning ecosystems in urban areas.

Dieter Hochuli has received funding from the Australian Research Council and the Environmental Trust of New South Wales for this research.

Lizzy Lowe does not work for, consult to, own shares in or receive funding from any company or organisation that would benefit from this article, and has no relevant affiliations.