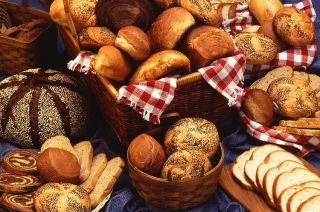 Any food with a "gluten-free" label in the United States now must meet a new set of standards outlined by the Food and Drug Administration (FDA).

The new rule goes into effect today (Aug. 5), and requires that foods labeled gluten-free have less than 20 parts of gluten per million parts of food — the lowest level that can be detected with current measuring tools. Any food labeled gluten-free cannot contain wheat, rye, barley or any of their crossbreeds, unless the grains are first stripped of gluten.

People with certain digestive condtions such as celiac disease are advised to avoid eating gluten.

Foods that naturally do not contain any gluten, such as bottled water or fruits and vegetables, can also be labeled gluten-free under the new rule.

"This standard 'gluten-free' definition eliminates uncertainty about how food producers label their products," Felicia Billingslea, director of FDA's Division of Food Labeling and Standards, said in a statement. "People with celiac disease can rest assured that foods labeled 'gluten-free' meet a clear standard established and enforced by FDA." [7 Allergy Myths (and the Truth Behind Them)]

The FDA announced the new rule last year and gave manufacturers one year to comply. About 5 percent of foods previously labeled gluten-free probably had more than 20 parts of gluten per million, according to the FDA.

Gluten is made of natural proteins found in wheat, rye and barley. Until now, there was no gold standard for what "gluten-free" meant. Without a clear definition, consumers with celiac disease could not determine if gluten-free food was really gluten-free enough, FDA officials said.

The FDA estimates that as many as 3 million people in the United States have celiac disease, an intestinal condition with symptoms that include abdominal pain and diarrhea. There is no cure for celiac disease, and the only way to manage the disease is to avoid eating gluten altogether, according to the American Celiac Disease Alliance.

Eating too much gluten can trigger an abnormal immune response for people with the condition. The body launches an attack on the lining of the small intestine, causing damage that prevents vital nutrients from being absorbed. Nutrient deficiency can lead to conditions such as anemia and osteoporosis. Other health conditions such as diabetes, thyroid disease and intestinal cancers can also develop for people with celiac disease.

The new rule applies to packaged food, but restaurant foods are a little trickier to regulate. The FDA said restaurant owners should make an effort to keep any gluten-free labels on menus consistent with the new rule. The FDA recommended that anyone concerned about gluten-free claims in restaurants should ask specifically what is meant by "gluten-free" and ask what ingredients are in the food.

FDA officials said it is important to note that some foods labeled gluten-free were shipped before the new rule's Aug. 5 compliance date. Any food that does not meet the new requirement will be considered misbranded and the FDA will take regulatory action.