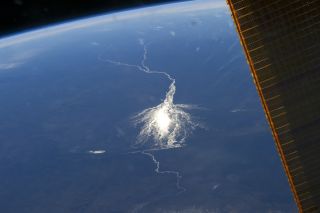 The great Okavango Delta in the Kalahari Desert glows in this panorama taken from the International Space Station on June 6, 2014.
(Image: © NASA)

Lit from above by the sun's glow, the Okavango Delta in Botswana's Kalahari Desert feeds an ecosystem bursting with life, from giraffes to antelope to elephants.

This view of the delta was captured by the Expedition 40 crew aboard the International Space Station on June 6. The sun's glint outlines the Okavango River, which spreads out over the savanna into a fanlike delta. Only 2 percent of the water that goes into the delta comes back out, according to NASA's Earth Observatory, which released the image today (July 28). Water exits through the Boteti River near the bottom of the photograph.

The Okavango Delta is one of the Seven Natural Wonders of Africa, a title bestowed by the conservation organization Seven Natural Wonders. This lush landscape shares its billing with other famous spots, including Mount Kilimanjaro and the Sahara Desert. The delta is among the largest inland deltas in the world, and is the most pristine inland delta in Africa, according to the organization. The United Nations Educational, Scientific and Cultural Organization (UNESCO), also lists the Okavango Delta among its World Heritage sites.

The Okavango Delta's water draws migratory birds and mammals, including elephants, wildebeests, hyenas and rhinoceroses. The delta floods during the dry season, according to UNESCO, making it a crucial part of life for these animals.